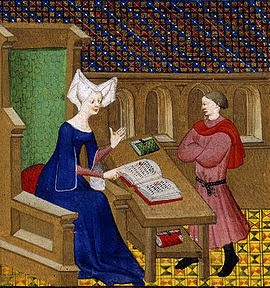 One of the interesting side effects of writing this blog is when I stumble across a hidden gem like Christine de Pizan, who I discovered not only while researching the life of Joan of Arc but also from Vanora Bennett's novel Blood Royal. She was one of the first women to make her living solely as a writer. This was in the 14th Century before the printing press, when most people, including women, were illiterate.

Christine was born in Venice in 1363, but but she moved to France with her family when she was 5. Her father Tommasso di Benvenuto da Pizzano was a doctor, astrologer as well as Councillor of the Republic in Venice. Soon after she was born, her father accepted a position at the court of Charles V. No one knows how Christine received an education. There is speculation that she may have been allowed to sit in on lessons with the Dauphin and his brother. Or perhaps her father made sure that she was well educated. Due to his position, Christine might have been able to make use of the King's library. Charles V's library was if not the best, then one of the best, in Europe. It is clear from Christine's writings that she was familiar with all of the major writer's of the period.

At the age of 15, Christine married Etienne du Castel, a royal secretary. Unusual for the time, Etienne seems to have encouraged Christine in her studies. It was apparently a happy marriage, Christine gave birth to 3 children, 2 boys and a girl. History probably wouldn't have hear of Christine at all, if she hadn't been widowed at the age of 24, when her husband died in an epidemic. With his estate tied up in lawsuits for the next 14 years, Christine need to find a way to support her 3 children as well as her mother and her neice. So Christine turned to the quill to make a living. "It is very difficult to keep one's pain bottled up….Fortune could not hurt me so deeply to keep me from having the company of the poets' muses. They induced me to write tearful complaints in rhyme, to lament my dead beloved husband"

At first she started off writing love ballads about her husband, which attracted patrons intrigued by the idea of a woman writer. While she established her reputation, she also worked copying and illustrating manuscripts. Illuminating and transcription were really the only two respectable professions that were available to women in the 14th century. Vicky Leon, in her book Outrageous Women of the Renaissance, writes that Christine established a workshop where she employed other women who had been impoverished like herself. So she wasn't just a writer, she was also a businesswoman, as well as an early feminist in an age when women were considered inferior beings. Soon she was hired to write custom work about her patrons romantic exploits. Over the next 20 years, she wrote 300 ballads along with many other shorter works. She also wrote a biography of Charles V called The Book of the Deeds and Good Manners of the Wise King Charles V. Many of her subsequent works are dedicated to the nobility including Isabeau, the Queen of Charles VI.

In 1402, Christine wrote a response to a piece by Jean de Meuin called The Romance of the Rose, in which he satrized courtly love, blaming women, calling them seductresses.She took him to task for the language that he used, calling it vulgar, and claiming that no woman would ever use such language. Christine's next work in 1405 was called The Book of the City of Ladies in which she defends women by gathering together a wide selection of famous women throughout history. They live in the 'City of Ladies.' Christine uses the women as building blocks for the city but also as a way to defend the rights of women. She also advocated that men and women should have an equal education. The book also contains a discussion between Christine and the 3 Female Virtues who are sent to help Christine build the city and to pick who will live within the city.  The 3 Virtues are Reason, Rectitude and Justice. Each woman chosen by the Virtues is to act as a positive role model for the other women who will follow them into the city.

Throughout her life Christine would continue to counter abusive literary treatments of women in her work. Some of the other works that she wrote include Christine's Vision, The Book of The Three Virtues (both in 1406), The Book of Peace in 1414 among others. In 1418, she entered the Abbe de Poissey where her daughter Marie lived as a nun. Christine's final work before her death was a poem eulogizing Joan of Arc which was published in 1429. No one knows exactly when Christine died, but most scholars believe that it was probably around 1430. She was 65 and had accomplished a great deal in her lifetime.

Many influential women owned and read copies of de Pizan's work including Mary of Hungary (who was regent for Charles V, the future Holy Roman Emperor and nephew of Catherine of Aragon.) Christine was rediscovered in the late 18th century but it was 20th century writers and scholars such as Simone de Beauvoir and Charity Cannon Willard, who argue that she should be considered an early feminist who portrayed through her work that woman could play an important role in society if they were allowed to.

Christine de Pizan should definitely be included in the pantheon of interesting women who lived during the Middle Ages along with Eleanor of Aquitaine and Joan of Arc.

mzjohansen said…
Fabulous post! Thanks! I am a huge fan of Vannora Bennet's work and enjoyed Blood Royal very much too
December 16, 2009 at 4:40 PM

Pauline said…
I have to admit to being a bit surprised that you didn't know de Pisan. More women who write should. Thanks for spreading the word.
December 16, 2009 at 5:13 PM

Daphne said…
Great post! I had never heard of de Pizan before reading Bennett's book and was surprised to discover she was a real person and not a fictional character (although her role in the book may have been entirely fictional!).
December 16, 2009 at 5:13 PM

I'm amazed too that I didn't know about Christine de Pizan. I definitely think that she's a woman that not only every writer should know about but every woman. I love finding out about women who weren't afraid to step out of the proscribed box that society put them in. I just think it is amazing that she was able to support her family by writing in the 14th century.
December 17, 2009 at 11:05 AM

Anonymous said…
I'm surprised that so many women still have not heard of Christine, but I'm a history nut along with having studied French in college. She definitely had an interesting life and is a role model still!
January 1, 2010 at 2:37 AM

Elizabeth Kerri Mahon said…
Karen, I seriously had never heard of her and I studied French too in college. The only women writers I knew of who were French were George Sand, Colette and Simone de Beauvoir!
January 2, 2010 at 7:12 PM

Unknown said…
This is ideal to grasp the meaning of the main ideas of the French medieval writer.

I have been fond of Christine de Pizan for quite a while for she promoted female artists like the illuminator Anastaise.

I am impressed by Christine de Pizan' s courage in pointing out the misogynistic ideas spread among the male dominated world.

I advise you the reading of the ebook "Anastaise, the Sharpened medieval Quill" by Alice Warwick.

Unknown said…
This is ideal to grasp the meaning of the main ideas of the French medieval writer.

I have been fond of Christine de Pizan for quite a while for she promoted female artists like the illuminator Anastaise.

I am impressed by Christine de Pizan' s courage in pointing out the misogynistic ideas spread among the male dominated world.

I advise you the reading of the ebook "Anastaise, the Sharpened medieval Quill" by Alice Warwick.