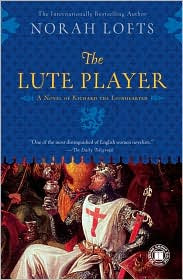 Recently I received a copy of the reissue of Nora Lofts 1951 historical novel The Lute Player from the good folks at Simon &Schuster.

One of the most renowned figures in medieval history, Richard the Lionhearted, inspired by a vision of the Holy Land, led his knights onto the battlefirelds of the Third Crusade.  During the years of fighting and intrigue, Richard's life was intertwined with the lives of two, strong, vibrant, and drastically different women who loved him - Berengaria, princess of Navarre, and his mother Eleanor of Aquitaine.  While his marriage to Berengaria was ill-fated, Eleanor loved her son with a frantic, possessive pride. But it is Blondel, the king's lute player, who here steps forward from the shadows to tell this tale of romance, war, and betrayal.

I've been a reader and lover of historical fiction since grade school but this is the first time that I've read a Nora Lofts novel, and it won't be the last. The back cover is a little misleading because the book really involves the lives of three women, Berengaria, Eleanor and Berengaria's half-sister Anna of Apieta, not just two.  Anna is not only illegitmate but she is also a hunchback which means that she has no hope of ever marrying or having a family.  The events detailed in the novel are actually set off by a single action of hers, hiring Blondel, who she meets in the market place.  Anna falls in love with him, although she knows it is hopeless, Blondel in turn falls in love with the beautiful Berengaria who is out of his league. Berengaria falls in love with Richard the Lionheart at first sight and is determined to be his wife or no one's, while Richard only loves war and other men.

For Berengaria's sake, Blondel follows Richard on the ill-fated Third Crusade, and then is the only one who can locate him when he is imprisoned in Austria. The novel is told through his eyes, Eleanor of Aquitaine's and Anna's. Lofts was unafraid to reveal her characters to be flawed, three-dimensional human beings, you love them and hate them as you get to know them through the course of the novel. Lofts also deftly portrays the hard lot of women in the Middle Ages, no matter their status. Both Eleanor and Anna are intelligent women, something that was not particularly prized in the Middle Ages when women were seen as either angels or whores, and they suffer because of it. Women who are often at the mercy at the hands of the men in their lives. Lofts is also not afraid to show the more unsavory side of life at the time either.  Although Lofts manages to give a true and accurate portrait of the horrors of war, this was actually the least interesting part of the book for me.  I also wish that we could have been privy to Berengaria's thoughts as opposed to seeing her from other's view points. Her story is a classic example of 'Be Careful What You Wish For."

Berengaria generally gets short shrift in the life of Richard the Lionhearted.  Although they were married, they spent very little time together. The reader can't help but feel for this beautiful woman whose only wish is for her husband to, if not love her, at least show her the respect that she deserves. Watching her disallusionment with Richard is one of the most painful parts of the book. It was also enjoyable to watch Anna and Berengaria forge a real relationship as the book progresses.

I confess that the only thing I knew about Blondel was gleaned from the Tim Rice/Stephen Oliver musical of the 80's, who portrays him as a blonde Medieval pop-star in the making, trying to craft a song for Richard (He comes up with the ditty "I'm a Monarchist"), along with his back up singers, The Blondettes. Lofts crafts the story of a young man who is thrust into a world that he has no idea who to deal with and who tries to mute pain and the horror that he has seen. He forges a friendship with Richard but also with Anna, which hopefully will save him in the end.

This was an exhilirating and rich novel, filled with details that make the age come alive for the reader. A real triumph. Simon & Schuster will be re-releasing Nora Loft's novel on Eleanor of Aquitaine in Spring 2010, and I will certainly be in the bookstore buying a copy!

Since I enjoyed this book so much I'm giving away a copy.
Note this giveaway is only available to my American and Canadian readers. Here are the rules:
1) Just leave a comment with your email address at the end of this post
2) The contest ends December 17th 2009 at 12:00 p.m. and will be announced on December 18th.
Eleanor of Aquitaine

Anonymous said…
Good morning.
I respect your opinion in book highly
so i would ofcourse love to read this book.

TIffany said…
Wow - this book looks fascinating! After seeing the film The Lion In Winter (if you haven't seen it you simply MUST!) I have been obsessed with all things Eleanor! Her relationship with her sons - particularly Richard - was incredibly interesting, and this book looks to expand on that. His is a story I have been waiting to read and research, so this book is at the top of my list. Thank you for hosting such a great giveaway!

Linda said…
I've always been curious about Berengaria. This novel sounds very interesting. Thanks for the giveaway.
lcbrower40(at)gmail(dot)com
December 11, 2009 at 5:43 PM

wendy wallach said…
I have never heard of this, even though it is a reissue.

jennem said…
Sounds fascinating, thanks for the chance!
Jennifer, jennem22 at yahoo dot com
December 12, 2009 at 9:08 AM

robin said…
I love the story of Richard, and Berengaria- first was facsinated by the robin Hood story when I was a child, then Plaidy's book as a teen-ager -
one of my dearest wishes is to see the site of Chateau Gaillard
I would love to read Lofts book- I have read other books by her and always enjoyed them.
lavenderbythesea@gmail.com
December 13, 2009 at 11:54 PM

Kelly Boyce said…
This book sounds amazing! I'll cross my fingers. What a great contest/giveaway!
lochbriar@hotmail.com
December 15, 2009 at 10:22 AM

Nancy Ewart said…
I first read this book years and years ago. I hadn't realized that Richard was supposed to be homosexual (there's very little evidence for that, by the way) but his marriage was not a success, even by the non-romantic standards of Medieval nobility. I was utterly mesmerized by Anna and the world she lived in. When Nora Lofts was good, she was very very good and this is one of her best, with a bitter-sweet ending that still makes me teary eyed.
December 17, 2009 at 1:53 AM

Sandra K321 said…
Oops. Don't think my comment went through so I'm trying again (if it turns out to be a dupe please just ignore this one!) I just came across this site and have subscribed to it via my Google reader. I enjoy reading historical fiction but am not familiar with this novel. Please include me in your drawing.
seknobloch(at)gmail(dot)com
December 17, 2009 at 7:30 AM

Amanda said…
Thanks for the giveaway!

Stephanie Cowell said…
This was one of the first historical novels I ever read and fell in love with it. I read it years later and found it just as good and the end makes me cry. I am so glad it's been re-released!!