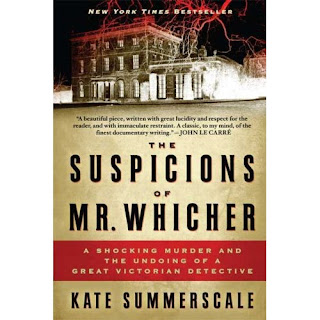 The Suspicions of Mr. Whicher by Kate Summerscale, published by Walker & Co. (US), Bloomsbury Books (UK)

It is midnight on 30th June 1860 and all is quiet in the Kent family's elegant house in Road, Wiltshire.  The next morning, however, they wake to find that their youngest son has been the victim of an unimaginably gruesome murder.  Even worse, the guilty party is surely one of their number - the house was bolted from the inside.  As Jack Whicher, the most celebrated detective of his day, arrives at Road to track down the killer, the murder provokes national hysteria at the thought of what might be festering behind the closed doors of respectable middle-class homes - scheming servants, rebellious children, insanity, jealously, loneliness and loathing.  This true story has all the hallmarks of a classic gripping murder mystery.  A body, a detective, a country houe steeped in secrets and a whole family of suspects - it is the original Victorian whodunnit.

I picked up this book at Heathrow airport when I first arrived in London last March, but I never got the chance to really sit down and read it until the past few days when I decided to reward myself with a little bit of what I like to call 'me' reading (books that aren't research books). The minute I picked it up I couldn't put it down until I finished it. I'm a huge mystery buff and I particularly love historical mysteries so I was immediately sucked into the Victorian world that Kate Summerscale so meticulously details.

The book unfolds as if it were a country house mystery, the type that readers might be familiar with if they've read Agatha Christie or Anne Perry. Detective Jonathan Whicher (who inspired Dickens and Wilkie Collins in their fiction) arrives from London to investigate the death of 4 year old Saville Kent who has been brutally murdered and dumped outside in the privy. Immediately he comes into conflict with the local police who resent having a policeman from London sent to help them, as well as resistance from the family.  While the Kent family want to find out who the murderer is, they are not comfortable having their private life pried into by a member of the lower class.  Suspicion falls on everyone, not just the family members, but their servants, and people who had worked for them. Samuel Kent had made a few enemies during his time in Road. Newspapers flocked to the scene of the crime to detail the story, fed by informants and the police themselves. Everyone has a theory, but there is no hard evidence.

The crime made Victorian families fear for their lives. Servants were no longer the faithful retainers of yesteryear, now they could be murderers. Finally Whicher takes a chance and has a suspect arrested, unfortunately due to lack of evidence, this person is released and Whicher's stellar career is effectively ended. Later Whicher learns that knowledge of a certain piece of evidence that could have been crucial to the case was surpressed out of embarassment on the part of the local police (it involved a ladies shift or night dress that was soiled).

Five years later, the same suspect confesses to the murder, there is a sensational trial and a conviction, but it is too late for Whicher, even though he has been proved right. Kate Summerscale's book works on a number of levels, not only is it a gripping mystery, but it is also a social history of Victorian Britain, as well as a history of the detective force in Britain as well as the detective in fiction. Jack Whicher was one of 8 men chosen to lead the new detective force in Britain, which was strongly resisted.  The idea of someone coming in and spying and prying into personal matters was anathema to the British. Secrecy was becoming very important, especially to the rising middle class at that time, but it also conflicted with the rise of the popular press as Summerscale points out. The number of newspapers increased in the 1850's to over 700 newspapers, that accompanied by the invention of the telegraph, meant that news traveled all over the world. Sensational murders like what happened at Road were no longer confined to the local area but were read about everywhere. And this was the murder of a child in a middle-class home, who should have been safe and happy.

Summerscale details the toll that the case took not just on Jack Whicher but also on the Kent family. Crime writers even as recently as the 1980's still believe that Samuel Kent (father of Saville) and the governess were the real killers of the child. Summerscale won the BBC Four Samuel Johnson Prize for The Suspicions of Mr. Whicher, as well as being shortlisted for the Crime Writer's Association Gold Dagger and it is easy to see why.  The book reads like a non-fiction novel. Reading the book you can see the echoes in every detective that came after including Sherlock Holmes. It's amazing reading the book that any crimes were solved when you consider things that we take for granted such as fingerprinting, DNA evidence, chain of command, CSI teams, are years in the future.  Detectives in the early 19th century had to rely on their wits and their deductive reasoning like the alienists who were just coming into being.

Summerscale has her own theory about the murder which she details in the book which makes perfect sense and fills in the gaps that were left in the confession of the eventual convicted suspect.

Anonymous said…
Oh I loved this book, too! I was totally gripped, and particularly loved the referencing of the press and how they reported it - goes to show that nothing changes, really.

I am pretty much obsessed by all things Victorian and slightly seedy (as anyone who reads my blog will know!) so when this came out I jumped on it in hardcover. I'm thinking I should get a paperback to peruse the finer points again, though. :)
November 29, 2009 at 12:00 PM

Elizabeth Kerri Mahon said…
I don't know if the American edition had the photographs of Whicher that are in the UK paperback edition, but it's nice to have both hardcover and paperback!

I too am obssessed with all things Victorian, particularly the seemy side of things. I've written about Madeleine Smith and Florence Bravo on the blog.
November 29, 2009 at 1:13 PM

A Bookshelf Monstrosity said…
I think this one sounds so interesting! Thanks for the review.
November 30, 2009 at 5:33 PM