The Power of the Force - Female Force 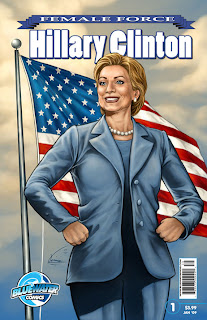 Even though technically I'm an adult, I still read graphic novels. A couple of months ago, I was in one of my favorite comic book stores when I found these comics by Blue Water Productions. Featuring Hilary Clinton, Sarah Palin, Michele Obama and Caroline Kennedy in the first few issues, the initial mandate was to feature strong women in politics. These issues have been collected into one book.

Since the first few issues, Female Force has done issues on Condoleeza Rice, Oprah, Barbara Walters and Princess Diana. The comics are about 35 pages, the art work is superb and best of all there is a bibliography of books and web-sites so that readers can find out more information about these women. I think they are great for both middle school and high school students. While they shouldn't replace reading biographies, it can give kids a strong sense of who these women were. Future issues will feature Nancy Pelosi, Stephanie Meyers (of Twilight Fame) and JK Rowling.

While I applaud Blue Water for the Female Force series, I would like to see them feature comics on other women like Margaret Thatcher, Benazir Bhutto and Indira Ghandi, not to mention Golda Meir. These countries had women in positions of power long before the US. It would also be cool if they ones on Eleanor Roosevelt and early suffragettes such as Susan B. Anthony and Alice Paul. Even a comic on Amelia Earhart would be more informative than the current movie version.

The comics are available on Amazon.com and from other web-sites such as Forbidden Planet.
Female Force

dave hambidge said…
Anything that promotes education is fair game (well almost) but how do these comics do on the accuracy stakes?
November 13, 2009 at 10:14 AM

Elizabeth Kerri Mahon said…
They are actually very accurate, and they include an extensive bibliography in the back.
November 13, 2009 at 12:16 PM