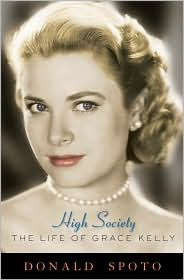 Today would have been the 80th birthday of Grace Kelly, born November 12, 1929. Last year, I wrote a post about her here.  Now a new book by author Donald Spoto was just released this month. I have read almost every major biography of Grace Kelly, so I'm sort of anxious as to whether or not this one is going to be any good. However, I have read several books by Donald Spoto, most recently his biography of Hitchcock Spellbound, so I am hopeful that this one won't be a hatchet job.


Drawing on his unprecedented access to Grace Kelly, bestselling biographer Donald Spoto at last offers an intimate, honest, and authoritative portrait of one of Hollywood’s legendary actresses. In just seven years–from 1950 through 1956–Grace Kelly embarked on a whirlwind career that included roles in eleven movies. From the principled Amy Fowler Kane in High Noon to the thrill-seeking Frances Stevens of To Catch a Thief, Grace established herself as one of Hollywood’s most talented actresses and iconic beauties. Her astonishing career lasted until her retirement at age twenty-six, when she withdrew from stage and screen to marry a European monarch and became a modern, working princess and mother.

Based on never-before-published or quoted interviews with Grace and those conducted over many years with her friends and colleagues–from costars James Stewart and Cary Grant to director Alfred Hitchcock–as well as many documents disclosed by her children for the first time, acclaimed biographer Donald Spoto explores the transformation of a convent schoolgirl to New York model, successful television actress, Oscar-winning movie star, and beloved royal.

As the princess requested, Spoto waited twenty-five years after her death to write this biography. Now, with honesty and insight, High Society reveals the truth of Grace Kelly’s personal life, the men she loved, the men she didn’t, and what lay behind the façade of her fairy-tale life.

Publishers Weekly actually gives the book a decent review. "Noted film biographer Spoto (Spellbound by Beauty) gives readers a previously unseen glimpse into the life of Grace Kelly (1929–1982), who went from Academy Award–winning actress to princess of Monaco. Cinephiles will love Spoto's insider look at Hollywood in the 1950s, and even those unfamiliar with Kelly's films will be drawn to the author's warm and generous portrayal of a woman who was more than a pretty face."  Library Journal and Kirkus are not quite so enamored of the book. I am interested to read it, although I'm not quite sure what new details he can really reveal. It's been 27 years since her death.  You would think that everything that could be written, has been. Since this book is almost $26 this might have to go on my Amazon wish list.

Any books that have just been released that you are particularly keen on reading? Are you all celebrity biographied out?
Grace Kelly

Evangeline Holland said…
Hmmm...what else can Spoto reveal that hasn't already been revealed about Grace? It's well known that she had affairs with many of her older costars, that she had a difficult relationship with her father, and that her marriage to Rainier was not the fairy tale it was portrayed to be. Unless Spoto includes some exclusive pictures, I don't think this will be a must-buy.
November 13, 2009 at 2:14 AM

dave hambidge said…
I wonder what she would have looked like at 80?

Elizabeth Kerri Mahon said…
Evangeline, according to several of the reviews I read, Spoto poo-poos the idea that Grace had affairs with her older married co-stars, which I find interesting since about 80 books say that she did.

Dave, from the pictures of her just before she died, she was still an incredibly attractive woman, so I would say that she still would have been stunning as an older woman.
November 13, 2009 at 12:19 PM

~Sia McKye~ said…
I've always loved the whole fairy tale drama around Grace Kelley. Realistically, she was far from the perfect woman, mother, wife, or Princess, for that matter. But then who is perfect?

She came into the limelight when private scandals and transgressions were idealized and rather hidden.

I don't read a lot of star biographies, but her story intrigues me. Will I read it? Probably, but later.

There are no really grab my attention celebrity stuff out there that I really want to read. I will tell you a great non-fiction, memoir that I AM enjoying: A Journal For Jordan, by Dana Canedy. Touches your heart, makes you laugh and cry. Well written and such a clear voice. If you haven't checked it out, do. It's worth it. :-)
November 13, 2009 at 3:24 PM

~Sia McKye~ said…
Oh, I love your archives, btw. I'll have to take the time to read them. I love history and you have several I'm thinking I'll have to read. Just thought I'd share that with you! Lovely blog.
November 13, 2009 at 3:28 PM

Evangeline Holland said…
Ha! Spoto must be a comedian, because Grace's affair with Ray Milland nearly broke apart his marriage and the general public got wind of it. I'll peek at the book to see if there are any new pictures, but if he's revising Grace's history than shame on him--concealing her imperfections doesn't obliterate her as a person.
November 21, 2009 at 5:16 AM