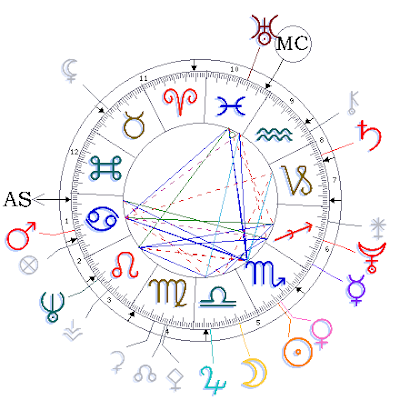 I do think that you can learn a lot about a person from a pyschological standpoint by looking at their birthchart. Certainly pyschoanalysts like Carl Jung were fascinating by what a birth chart can reveal about a person. I've personally always been fascinated by astrology ever since I was old enough to know exactly what it was. I'm just going to look at a few key themes in Marie's chart, primarily her Sun, Moon, Venus and Rising Sign.

Marie Antoinette was born on November 2nd in Vienna at 7:30 in the evening. At the time of her birth Cancer was rising, the Sun was in Scorpio, Her Moon was in Libra and her Venus is in Scorpio as well. The Queen's chart is very much balanced between the elements of Water and Earth with a little fire and not much Air.

Sun in Scorpio According to Debbi Kempton-Smith's book people who have the Sun in Scorpio hate and love with equal intensity that lasts forever. That certainly is true of Marie Antoinette. The people that she loathed like Cardinal de Rohan, she loathed, and the people that she loved like Axel Fersen and the Princesse de Lamballe, and the Duchesse de Polignac she loved fervently. People with Sun in Scorpio also are incredibly loyal to the point of stupidity. And Marie Antoinette was certainly a loyal friend, even after she realized that she and the Princesse de Lamballe didn't really have that much in common, she stayed loyal. The same with the Duchesse de Polignac. Sadly her loyalty wasn't often rewarded. Scorpios are also stubborn, and that is true of Marie Antoinette. Once she made up her mind about something or someone, it was very hard for her to change her mind. Witness the whole brouhaha over Madame de Barry who she famously snubbed. It took a great deal of convincing to get Marie Antoinette even to speak to her. Also, no one could get Marie Antoinette to do anything that she didn't want to do. Her mother, the Empress Maria Theresa, constantly wrote her letters exhorting her to stop riding so much, to spent more time studying, and Marie much of the time ignored her mother's exhortations.

In her natal chart, the Sun is in the 5th House. Without giving birth to a fulfilling work, or to a child, and without enjoying the thrills of a passionate and dramatic love, life is meaningless. This is certainly true of Marie Antoinette. It wasn't until she had her children that she felt really fulfilled as a woman, that her life had purpose. Once her daughter was born, she began to give up the frivolous pursuits that had filled her life when she first arrived in France. Scorpios also tend to be very private, another reason why Marie created her own little oasis at the Petit Trianon, to have some privacy from always having to be on display, which she hated.

Marie Antoinette's Rising Sign is Cancer. Your rising sign is the face that you present to the world, while your Sun is more your Ego. People with their rising sign in Cancer can be dreamy, which Marie Antoinette certainly was as a child. With this Ascendant, they also have a very warm personality which Marie Antoinette had in spades. Cancers also tend to be homebodies. Marie Antoinette created a home for herself at the Petit Trianon which even the King had to be invited to. That was her own personal space, an oasis where she retreated when the rigid etiquette of the Court at Versailles became too much for her. There Marie Antoinette dressed more casually then she did at Court, where the gauze dresses that later became fashionable.

Marie Antoinette's Moon is in Libra (as is mine): The moon represents the feminine side of the personality. For a woman, the Moon is almost as important as the Sun and the Ascendant. Libra is the sign of balance, Librans would rather have a discussion than fight. Librans are also very sociable. People with their Moon in Libra know how to flatter, and flirt. Marie Antoinette was known for being very flirtatious, but she rarely flirted with intent. In fact her flirting with men at court was often misunderstood. Women with Moon in Libra also are very feminine which Marie Antoinette certainly was very much so. According to Debbi Kempton Smith's book Secrets from a Star-Gazer's Notebook, people with Moon in Libra "give the best gift of all, themselves, wholeheartedly. They get stepped on for their kindness." Librans also live to make other people happy. Marie Antoinette was certainly a people-pleaser in many ways, and easily influenced when she was younger.

And finally, Marie Antoinette's Venus is in Scorpio. Venus represents how one expresses love while Mars represents how one expresses anger and passion. People with Venus in Scorpio are able to love to distraction and to hate at the same time. Marie Antoinette was certainly very passionate in regards to her friends, if not towards the King. Someone with Venus in Scorpio would not be happy with an unsatisfactory love life. Although historians are divided about whether or not she had an affair with Axel Fersen, I think that with her Venus in Scorpio, if Marie Antoinette fell in love with someone deeply, she would want to take the risk to take that next step. Love and sex would be entertwined for her.

I hope this brief glimpse into Marie Antoinette's birthchart has been interesting.

elena maria vidal said…
According to La Rocheterie, M.A.'s mother brought Dr. Gassner, a learned priest and healer, to see the young princess. He was not an astrologer but had a gift of foresight and said, upon looking at Marie-Antoinette, that "there are crosses for all shoulders."

Shainnen Somerville said…
You know, I can't believe I found your post about Marie Antoinette, and I now LOVE your blog! I share a birthday with Marie and it turns out, with you as well. And I want to say thank you because it took me forever to find Marie's birth time. And I think it's odd because my rising sign is also Cancer, so I have always felt some sort of connection towards Marie, like she was greatly misunderstood. I feel that she was a good queen and she wanted to help her people but she didn't know how. And my moon sign is Gemini, but Libra's and Gemini's are the Air signs and they're both very extremely understanding towards one other, since they're in the same element family. I know that this post is at least 4 years old, but if you read this, I just want to say thank you. And I hope that you can see this comment, because I feel that I have found a blogger that I can relate to most now. Thank you! :)
September 22, 2013 at 5:47 PM

Unknown said…
Thanks for shearing information about Astrology Birth Chart Interpretation in NY
November 13, 2013 at 5:20 AM

Unknown said…
Thanks for sharing this article post. I was looking for something like this. Your articles have inspires me a lot. I have new idea about the same topics in my blog. Thanks
astrologer Orlando
January 24, 2015 at 11:46 AM

Unknown said…
Thanks for sharing this information about astrology with us!
This is excellent information. It is amazing and wonderful to visit your site.
astrology birth chart reading
January 27, 2015 at 8:57 PM

Unknown said…
Thank you for posting!! Sun in scorp, moon in Libra here as well!! Maybe we are drawn to Marie for a reason! My mother is an astrologer and I am fascinated by those charts who are similar to mine! I have Virgo rising tho which can be unfortunate, it is at 3' tho!