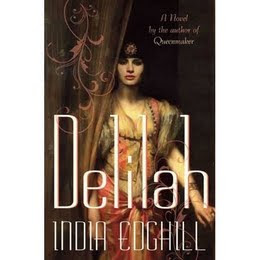 Scandalous Women is pleased to welcome India Edghill to the blog to talk about her new book Delilah which will be released by St. Martin's Press on November 24th.

Given to the temple of Atargatis as a child, Delilah is raised to be a priestess to the Five Cities that rule Canaan. With her beloved friend Aylah, Delilah grows up under the watchful eyes of high priestess Derceto, who sees the devout young priestesses as valuable playing pieces in her political schemes.

In the hills of Canaan, the Israelites chafe under the rule of the Five Cities, and choose Samson to lead them to victory. A reluctant warrior, Samson is a man of great heart who prefers peace to war. But fearing a rebellion, those who rule the Five Cities will do anything to capture Samson. When Samson catches a glimpse of Delilah, he is ready to risk his freedom to marry her, and Derceto seizes the chance to have Samson at her mercy. The Temple's intrigues against Samson force Aylah and Delilah apart, lead Delilah to question her own heart, and change her future forever.

A glorious and inventive retelling of an ancient story, Delilah is a soaring tale of political turmoil, searing betrayal, passionate friendship, and forbidden love.

Welcome to Scandalous Women India! You've written QUEENMAKER, about King David's queen, Michal; WISDOM'S DAUGHTER, about King Solomon and the Queen of Sheba, and now, in your latest novel, DELILAH, you tell the story of Delilah and Samson. What was it about Delilah that compelled you to tell her story?

The fact that she's been vilified for so many centuries -- because her side lost. Flip the winner, historically speaking, and she's a great heroine.

What was the starting point for your research on the book?

My starting point is always the Bible (KJV, which I love for beauty of language.) The Crossways Bible Gateway is invaluable. (http://www.biblegateway.com/) Unfortunately, the Bible leaves huge gaps in its stories, which can be minefields for the unsuspecting author! In the case of King David (QUEENMAKER), I was happily writing along and came upon Absalom's revolt.You have to understand here that David is king, has the standing army, the city of Jerusalem, and a permanent water supply. Absalom has his rowdy friends and some trained war gerbils. Yet as Absalom approaches Jerusalem, King David happily chortles "We must arise and flee!" Leaving the poor author saying "Why, David? WHY must you do this thing?" Oh, that was a fun moment. With the Delilah story, it managed to escape my notice that I was going to have to bring down a temple on a lot of people...and I hate killing off people.

Tell us something surprising about the life of women in Philistia.

I'm not sure there's anything that surprising. In all of human history, the average woman ran her household and raised her children. She spun and wove; ground grain and baked. She was responsible for the household gods. Woman's work's never done, and it's always been cyclical. Some women ran their own businesses -- it still boils down to the women doing the work!

Unknown said…
I cannot wait 'til this book comes out and would love to win a copy. :)

Amanda said…
Oh I'd love to win this! I always thought that it's such a fascinating story in the Bible. I love how looking it from a different perspective just drastically changes things.

I'm a follower (love your blog)!

A Bookshelf Monstrosity said…
Thanks for the interview. I liked reading about the background for the novel. Great giveaway!

Linda said…
Years ago I read The Red Tent, but have never read any other Biblical fiction. This book sounds great.
I am already a follower.
lcbrower40(at)gmail(dot)com
November 19, 2009 at 3:42 PM

Celticlady's Reviews said…
Enter me please
I am a follower
I twittered here:

Gwendolyn B. said…
I'd love to read this - thanks for the chance to win a copy!

Christy B said…
I'd love to read this! I'm already a follower.

Patricia Altner said…
I love fiction based on Biblical stories! Delilah sound like a fascinating gal.