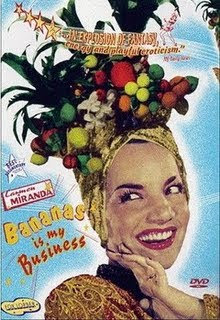 Those of us who remember that dynamic "tutti frutti " dancing diva, Carmen Miranda, will never forget her bombastic style and sensuous singing. Carmen Miranda who died on August 5, 1955 at the far too young age of 46 set the standard for Latin performers. She broke through racial barriers to make a dramatic mark on the silver screen in Hollywood and by some accounts she was one of the highest-paid artists and reported to be the highest-earning woman in the United States during the 1940s and 1950's, the heyday of her oeuvre.

Although Portuguese-born, Miranda was famous for promoting Brazil in her role as an entertainer. It is no wonder, therefore, that Brazilians called her their own. When she died, according to her wishes her body was flown back to Brazil where the Brazilian government declared a period of national mourning. In tribute to her colossal memory more than a million people stood on the funeral possession's route to mourn her untimely death.

A Good Will Ambassador

This was no ordinary diva. Carmen Miranda was a good will ambassador for Brazil as part of President Roosevelt's Good Neighbor Policy, designed to strengthen links with Latin America and Europe. The premise of President Roosevelt's policy was that in delivering entertainment like hers, the policy would be better received by the American public. And, indeed it did just that. The public wanted more but her career was short lived.

The phrase "Tropicalismo" and CARMEN MIRANDA click together like the rhythm of a samba. The Brazilian Bombshell began her career as a samba singer in 1928 the height of the Jazz Age in American movies, but she was already a genuine superstar in Brazil. I recall seeing many of her iconic stylized and outlandishly flamboyant performances and reveled at her amazing dexterity and vitality that lit up the silver screen with jiggling musical numbers. All the while her antics were original entertainment exuding sexy shimmy and shakes all the time dancing to the beat of a Brazilian band and singing one of her trademark songs, "Chick-A-Boom, Chick-A-Boom." When you repeat these words, "Chick-A-Boom, Chick-A-Boom," you can just feel the beat that makes you want to move to the Latin rhythm. Carmen Miranda became known as "the lady in the "tutti-frutti hat," appearing in Hollywood movies wearing high platform shoes and towering turban-like headdresses made of fruit or other exotic decorations. The platform shoes gave the petite entertainer height as did the towering headdresses and the sensuous evening wear she wore slithered to the curves of her curvaceous body.

Carmen Miranda's hat fetish may harken back to the early days when she was employed in a hat shop in Rio, which incidentally was called Olinda, the name of her oldest sister. Carmen Miranda was primarily a super star, a modern woman who multi-tasked her talents in several directions. Her fruit laden hats and sensuous costumes inspired a collection of fruity Bakelite jewelry--pins, brooches, bracelets, necklaces, which today are highly collectible mementos of her iconography. Any woman on a budget could find commercial versions of fruity jewelry, which were sold in fashionable department stores. I remember my aunt Doris, who was quite a flamboyant character herself, wearing a matching tutti-fruity necklace and bracelet, plus an outfit that reminded me of Carmen Miranda's style. Doris was a party woman and paid tribute to Miranda by dancing to the tune of Latin bands in the late 1950s.

A trouper to the end, Carmen Miranda unknowingly suffered a mild heart attack during a live segment of the Jimmy Durante Show. Miranda quickly pulled herself together to finish the show, but the strain was too much for her and she died later that night after suffering a second heart attack at her home. In retrospect accounts in the newspapers of her passing revealed that her untimely death was caused in part by the fact that in the later years of her life Miranda, like so many other stars, began taking amphetamines and barbiturates which took a toll on her body.

Further abetting her unhappiness she had an extremely difficult and abusive marriage. Her sister Aurora stated in the documentary, "Bananas is My Business, that the marriage was a burden in her life; he only married her for her money." Amazing, is it not, that despite it all she smiled and beguiled us with her ebullient silver screen personality.

Members of the Art Deco Society of New York will be attending the 11th World Congress on Art Deco in Rio de Janeiro in 2011 and among the places they will probably visit is the museum dedicated to Carmen Miranda in the Flamengo neighborhood on Avenida Rui Barbosa. Marcio Alves Roiter, Founder-President of the Instituto Art Deco Brasil, is spearheading the Art Deco congress in Rio, which is destined to be an outstanding occasion to visit Art Deco architecture, museums, galleries and all things that are Latin Art Deco. To learn more about the Art Deco Congress visit: (http://www.artdecobrasil.com/). The Carmen Miranda museum in Rio houses a treasure trove of original costumes, her amazing "tutti frutti" hats and clips of her filmography. Why not take a vicarious trip to Brazil now by visiting the museum. For more information about the exhibits click the Rio link at http://www.artdeco.org/. Doni Sacramento has also created one of the best Internet sources on Carmen, http://www.carmen.miranda.nom.br/.

If you're in California nostalgic inquirers may wish to visit Carmen Miranda Square, which is only one of a number of Los Angeles city intersections named for the legendary performer. Interested? Go to the intersection of Hollywood Boulevard and Orange Drive across from Grauman's Chinese Theater where Carmen Miranda's footprints are preserved in concrete. Imagine if you will how it might feel to put your feet into Carmen's imprints and recall the pulsating rhythm that must have emanated from such animated feet.

Get Into Carmen Miranda Groove

Why not take a vicarious trip back in time, put on some samba music and remember Carmen Miranda's incredible energy, "joie de vivre" joy for life and her captivating smile. If she were with us today she might say, "Dance like you've never danced before, stay up all night, get carried away and dance like nobodies watching but do it Carmen Miranda style!!!"

Polly Guerin's first job in journalism was as Accessories Editor at the fashion bible, the trade newspaper Women's Wear Daily where she honed writing about Accessories and later as professor at the Fashion Institute of Technology where she lectured on the subject: Product Knowlege. Polly also wrote on the subject of costume jewelry for Art & Antiques magazine. She is a vice president of the Romance Writers of America/New York Chapter and on the board of the Art Deco Society of New York. Visit her at www.pollytalk.com with links to her Internet PollyTalk column and blog www.amazingartdecodivas.blogspot.com.
Carmen Miranda

Celticlady's Reviews said…
I used to love watching her in the old movies on TCM network. I always wondered how in the heck she could keep those fruit baskets on her head and sing and dance at the same time....very interesting. I did not know she died so young.. you wonder if all that fame is worth it..
November 25, 2009 at 1:01 PM