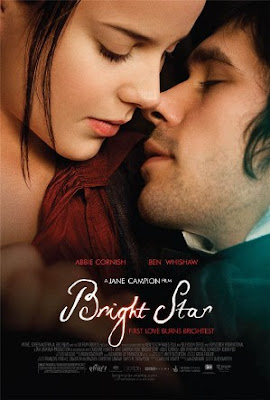 Cast
Ben Whishaw as John Keats
Abbie Cornish as Fanny Brawne
Paul Schneider as Charles Armitage Brown
Kerry Fox as Mrs. Brawne
Thomas Sangster as Samuel Brawne
Jonathan Aris as Leigh Hunt
Samuel Barnett as Joseph Severn
Written and directed by Jane Campion
On Friday I went to see Bright Star, the new film about the romance between poet John Keats and Fanny Brawne, literally the girl next door. I was intrigued to see the film because I had been under the mistaken impression that while Keats had been in love with Fanny, she didn't return his feelings.

The film details their relationship from their first meeting in 1818 until Keats' death from tuberculosis in Rome in 1821 at the age of 25. Along the way there are obstacles, namely the objections of Keats' friend Charles Armitage Brown, who considers Fanny to be a nuisance, taking Keats away from his work, to Keats' lack of money and ill-health. Despite these obstacles, the love between Keats and Fanny keeps growing until they are engaged. Keats goes off to Rome for his health, but he is aware before he leave that he will probably not return to England.

I'm going to admit straight-up that I am not a big Jane Campion fan. I thought her adaptation of the Henry James novel 'Portrait of a Lady' totally missed the point of the novel, and I wasn't enamored of The Piano either (but that may just be because I can't stand Holly Hunter either), so I didn't have high hopes for this film. Well, color me surprised, I absolutely loved it. The film moves exceedingly slow at times, Campion lingers on the small moments, the first time that Keats touches Fanny's hand for example or the first time that they kiss. She doesn't rush the 'getting to know you' period of their relationship. It's almost as if it unfolds in real time.

There are so many delightful scenes in this film, particularly when Keats is explaining poetry to Fanny who says that she doesn't understand it. She even tells Keats that she doesn't completely admire his poem Endymion. Keats and Fanny don't really seem to have that much in common, she loves fashion and gossip, while he seems contemplative and bookish, but despite themselves they are immensely attracted to one another. Another delightful scene is when Keats spends Christmas with the Brawne family, despite his friend Brown having made other plans for them. It's not just the scenes between Fanny and Keats that resonate with all the longing, and pang of first love, but also the domestic scenes between Fanny and her family, Fanny dragging her reluctant brother and sister along as chaperones whenever she wants to see Keats. At times the emotions might seem over the top, particularly Fanny's but if one remembers back to what you were like when you fell in love for the first time, they seem all to real.


I've only seen Abby Cornish in Elizabeth: The Golden Age, and heard the rumors about her and Ryan Phillipe, so I was incredibly impressed with her work here in Bright Star, she fairly glows whenever Keats is around, and she's fully prepared to take on his friend Charles Armitage Brown, when he insults her. Ben Whishaw is also effective as John Keats. He's completely believable as the poet right down to his ink-stained fingers, and so thin, one worries about his health in real life. Paul Schneider was also incredibly impressive, his Scottish accent was so good, I couldn't believe that he was actually from North Carolina in real life. Oh, and the adorable actor from Love Actually plays Fanny's brother Samuel. It's hard to believe that he's all grown up.

I highly recommend this film, particularly if you are a huge fan of the Regency period. The costumes are divine, and as far as I can tell, entirely appropriate for the period, right down to the shoes and the undergarments.

If you want to read more about Fanny Brawne, her romance with Keats and her life after his death, there is an interesting article here.

You can also read a chapter from Andrew Motion's biography of Keats here.

Also here is a link to the Keats house in Hampstead which I visited years ago, and now that I've seen there movie, I want to go back. It's just re-opened to the public this past summer, after a major restoration.

Kelly Boyce said…
Thanks for the review - I really wanted to see this movie even though I'm not a huge Campion fan either.
October 5, 2009 at 9:14 AM

Elizabeth Kerri Mahon said…
Glad that you enjoyed the review. The movie is so worth seeing. I'm glad that I went.
October 5, 2009 at 10:57 AM

Sarah Johnson said…
I'm eager to see this movie, but chances are about nil that it will be playing anywhere near me! I'll be waiting for it to come out on DVD instead. Thanks for the review - I've been interested in the relationship between Keats and Fanny Brawne since reading about them in Jude Morgan's novel Passion.
October 5, 2009 at 5:12 PM

Elizabeth Kerri Mahon said…
Sarah, I've been meaning to read Passion for the longest time. It's on my TBR pile. I must pick it up soon. Bright Star just went into wide release last week, so perhaps it will come to a theater near you.
October 9, 2009 at 12:05 PM

MrRed2020 said…
Really looking forward to checking this one out! Campion is such an amazing director, and the visuals look stunning as well. You should check out the film Bright Star’s official site, where they've announced the Love Letter Contest. Those who enter will have to submit a hand-made love letter or love tweet for their chance to win two unique pieces of jewelry from A Diamond Is Forever. Runners up will receive a fountain pen from Montblanc. Find more details here:_brightstar-movie.com_Follow Keat's Tweets here: http://twitter.com/KeatsTweets
October 15, 2009 at 1:41 AM