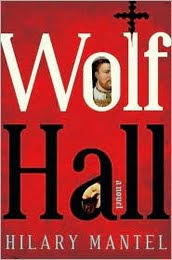 The book world was buzzing yesterday over Hilary Mantel, author of WOLF HALL winning Britain's most prestigious literary honor, the 41st Annual Man Booker prize, beating out the other nominees, which included A.S. Byatt, J.M. Coetzee (both former winners), Adam Foulds, Simon Mawer, and Sarah Waters. In addition to the award, Mantel will receive £50,000 (about $80,000). You can read a full report of the ceremony and why she won here.

I was struck by this paragraph in the NYTimes article: 'In the run-up to Tuesday’s ceremony at the Guildhall in London, Ms. Mantel, 57, was the overwhelming favorite, with the bookmakers William Hill giving “Wolf Hall” odds of 10-11, the shortest odds ever for a nominee.'
I was lucky to receive a review copy of WOLF HALL from the publisher (According to the new FTC rules, bloggers must disclose how they receive their books). Normally I only review books that fall under the purview of Scandalous Women in history but I couldn't resist the idea of reading a book about the wily Thomas Cromwell. Perhaps its because of James Frain's magnificent performance in The Tudors (and I really hate this show so that's saying something.) Given the popularity of The Tudors, both the series and the dynasty, it's interesting that Mantel has chosen to focus more on the men, then the women. Countless books have been written about Henry's wives, his mistresses, and even Cardinal Wolsey, but Cromwell has been neglected. For that alone, it's worth reading the book.

I'll be doing a giveaway of WOLF HALL with a review on Sunday. The novel covers the period in history covered by the first two series of The Tudors, meaning the rise of Anne Boleyn seen through Cromwell's eyes. I will say this, the book is not a fast read, it is incredibly dense, but the language is so vivid and the world she creates is so fascinating. There is nothing worse than finding a book that you really want to read, and then having to do other things, when all you want to do is curl up on the bed and indulge. And the book is so heavy at 532 pages that it is not really something you can schlep on the subway.

For another opinion, the book was recently reviewed in The New York Times book section by Janet Maslin. You can read the review here.

Hilary Mantel does not have a web-site but you can find out more information about the author at www.henryholt.com.
Hilary Mantel Wolf Hall

Amanda said…
I too think that there should be more books written about the Tudor men. When I was an undergrad in 2003, I went to London and had my picture taken by the Cromwell statue outside of Parliament. This year I visited London again and took another picture. Not sure exactly why but for some reason, he just fascinates me. I look forward to your review of the book and the giveaway!
October 8, 2009 at 10:02 AM

Elizabeth Kerri Mahon said…
Thanks Amanda. It's an interesting book and I hope that people enter the giveaway, because they are going to get a great book.
October 9, 2009 at 12:57 PM