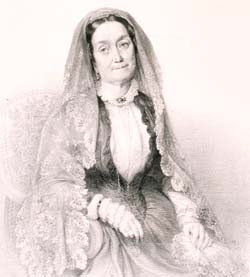 Scandalous Women is pleased to welcome author Audrey Braver to the blog. Audrey Braver is a native of Harrisburg, Pennsylvania. She has a degree in Business Administration and is an alumna of Baruch College, CUNY, in New York City. About every fifteen years, she changes careers, one of which was Director of the Morris-Jumel Mansion, a Historic House Museum of the Decorative Arts in New York, the former home of Eliza Jumel Burr. Currently, she is a book reviewer for the Historical Novels Review. Under the pseudonym of A. K. Daniels, Audrey has published a fictional novel, “A Helluva Guy, ” available through Amazon.com and on Amazon’s Kindle. Audrey is currently writing a fictional biography of Madame Jumel. Although, she loves living in New York, London is her favorite city and considers it her second home.

Born in a brothel in Providence, Rhode Island, in 1775, Betsy Bowen was the daughter of a prostitute and followed in her mother’s footsteps, the one exception being that she was not a streetwalker. Betsy attained a higher status in that profession, that of kept woman. Her first liaison was with a prominent man in Providence who kept her exclusively for himself in a brothel. She was sixteen when their liaison began. When she became pregnant, her protector took her child and paid Betsy to leave town. She decided to start a new life in New York City where she got work as a poorly-paid supernumerary in the opera.

Eventually, she changed her name to Eliza. She accepted the protection of a French sea captain, Emile de la Croix, and took his name. When he returned to France, Eliza went with him. She was accepted by Napoleonic society and became the toast of Paris. She returned to New York alone about 1804, determined to start a millinery business with her newly acquired knowledge of French fashion. She rented a shop in the basement of Stephen Jumel’s wine shop. Her business failed and Eliza turned her shop assistants into prostitutes, becoming their madam.

Stephen was attracted to his tenant and Eliza wasted no time. She became his mistress and moved into his house. Stephen was aware of her past, but in the French spirit of laissez-faire, he didn’t mind. Eliza wanted more than protection from Stephen, she wanted marriage. She knew that it was only as a married lady that she would be accepted by New York society. Despite their living arrangements, Stephen as an eligible bachelor, continued to be invited by the best people, without Eliza of course.

One day when Stephen was away on business, a rider caught up with him with the news that Eliza was dying. Stephen immediately headed back to New York. When he arrived, her doctor and his priest assured him she would not live out the night. Eliza made a deathbed request of Stephen that he save her immortal soul by marrying her before she died. His priest was there, time was of the essence, so Stephen married her on the spot. Miraculously, Eliza recovered, some say she was never in danger, and tricked Stephen into marriage. The truth will never be known. However, Stephen did not feel betrayed. He remarried her in a ceremony in Old Saint Patrick’s Church after her recovery. Stephen invited all his society friends, none came.

In 1810, Stephen bought Eliza a magnificent Georgian Palladian mansion in Washington Heights, now known as the Morris-Jumel Mansion, and opened to the public as a Historic House Museum of the Decorative Arts. As a wealthy, married woman, Eliza sought revenge on her first lover by returning to Providence. There is no documentation that her return had any effect, negative or otherwise, on his first lover.

However, it did have a lasting consequence on one male from her past, it was at this time that her natural son learned who his mother was. Tragically, he spent most of the rest of his life trying to get her to acknowledge him. Knowing that Stephen wanted to have children, Eliza used this trip to Providence to collect her sister’s illegitimate daughter, Mary Bowen. When they arrived back in New York, Stephen was enchanted by the child and adopted her.

The family Jumel went to France on one of Stephen’s ships, the Eliza, and once again, Paris welcomed Eliza. The Jumels settled in and Mary was enrolled in a convent school. Stephen decided to remain in France and sent Eliza home with his Power of Attorney to sell off his property and return to him with the proceeds. Eliza saw her chance to make a fortune and used Stephen’s POA to purchase property, increasing their fortune tremendously. She refused to return to France and Stephen was forced to return to America. Their marriage was effectively over. Eliza retained Stephen’s POA and engaged in buying more and more New York real estate, while Stephen, now an old man, retired to the farm in Washington Heights where he died after an accident in 1830..

In 1832, Eliza married Aaron Burr. She felt his status as a former Vice President would bring her the recognition she’d craved all her life. It did not. Their farcical marriage ended in divorce within two days of Burr’s death. Thereafter Eliza styled herself as the widow of the Vice President of the United States.

Her adopted daughter, Mary had married a man named Nelson Chase, they had two children whom Eliza raised after Mary died an early death. Through these children, Eliza managed to follow a life that aped that of Grand Society. She went to Saratoga in the season. She had a home there and every morning she managed to get her carriage in front of the line that went from the hotels to take the waters.

One day, a black man managed to maneuver a carriage directly behind Eliza’s. He imitated her every gesture, causing the onlookers to laugh. Eliza spotted him and realized he was making fun of her. The next day, her carriage was first in line, as usual, but Eliza had added a pistol as one of her accessories. The experience of the previous day was never repeated.

When Eliza Jumel Burr, the former Betsy Bowen, died in 1865, at age 90, she was the wealthiest woman in the United States.

Thanks Audrey for stopping by! You can learn more about the Morris-Jumel mansion here.
Eliza Jumel Burr

Elizabeth Kerri Mahon said…
Utopia, I'm glad that you enjoyed it. Audrey has been trying to get her novel about Eliza published for years.
October 16, 2009 at 12:11 PM

Lisbeth Eng said…
What a fascinating life she had, and certainly scandalous! Very entertaining, but sad, too. Thanks Audrey and Elizabeth.

Native NYer said…
In many ways, one can admire the determination and strength it took for Eliza to reinvent herself and to survive as a woman alone in a man's world. However, you can also see her less desirable traits -- greed, manipulatin and selfishness. A pity about her son. She rejected him, yet took on another woman's child. Truly scandalous!
October 16, 2009 at 5:19 PM

STORIDIVA said…
WHAT! Another HO I didn't know?
This was a terrific piece and Audrey outlined her beautifully and in depth.
It was the kind of life that some women had to live back then, which is why I love historicals , reading and writing them.
Great job Audrey
October 17, 2009 at 11:18 AM

Elizabeth Kerri Mahon said…
Thanks everyone for stopping by! Eliza's story is one that more people should know about. She lived her life according to her terms, no one else's. You have to admire her even if you don't necessarily want to be her best friend.
October 17, 2009 at 11:46 AM