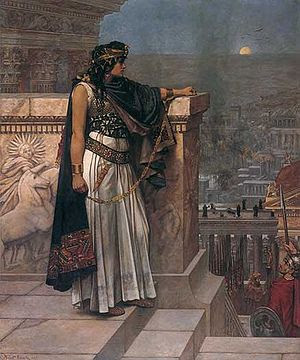 I have a confession to make: I had never heard of Zenobia until I read Bertrice Small's romance called Beloved. One of the coolest chicks ever to live in the 2nd century A.D. and I have a romance novel to thank for finding out about her.

Zenobia was born in Palmyra in what is now present day Syria. It was a city of 150,000, smack dab in the middle of where several key trade routes intersected, which allowed them to collect huge taxes, a right the Palmyrans earned by being a buffer between Rome and the Persian Empire.

We don't know much about Zenobia's early childhood or her family. Her father was probably a wealthy merchant and her mother possibly Egyptian. Zenobia's Latin name was Septima Zenobia and her Aramaic name Bat Zabbai. Of course, later historians came up with fanciful tales of Zenobia growing up as a tomboy. When she was 15, she was married off to a King of Palmyra Septimius Odaenathus in 258 as his second wife. Odaenthus had proved himself in service to the Empire, fighting against the Persians.

Zenobia was described by contemporary historians as 'beautiful, chaste, and clever.' She apparently had long black hair, dark eyes, teeth that shone like pearls and dark skin. Zenobia loved hunting and riding her horses, she spoke several languages and was learned enough to be able to discuss philosophy with the great minds of the day. Like many Scandalous Women, she had no use for the company of women, finding them trivial, she preferred to hang out with the boys, riding, hunting and drinking on occassion with her officers. Historians also claimed that Zenobia only allowed her husband into her bed to procreate, and once that was achieved she denied him her bed until it was time to make another baby. She and Odaenathus managed to have at least three children during their short marriage.

In 267 or 266, Odaenathus was mysteriously assassinated, possibly by his nephew Maeonius, who was pissed off that he had been punished for insubordination. Odaenathus's heir, Zenobia's step-son, Hairan was also killed as well. Zenobia had barely put on her widow's weeds before she took the iniative to seize power, ostensibly in her son Valballathus' name who was just a baby at the time. Zenobia said that she was trying to protect the Eastern Roman Empire for the peace of Rome, however, her efforts significantly increased the power of her throne. Claiming descent from Cleopatra and Dido, Queen of Carthage, Zenobia marched into Egypt in 269, and took control. The Roman prefect of Egypt, Tenagino Probus and his army, tried to expel her from Egypt, but Zenobia's forces captured and beheaded Probus. She then proclaimed herself Queen of Egypt.

Zenobia soon became known as a "Warrior Queen". In leading her army, she displayed significant prowess: she was an able horse rider and would walk three or four miles with her foot soldiers. Zenobia continued to increase her power by moving into Asia minor, as far as Ankara, moving onto to Lebanon and Palestine. In her short lived empire, Zenobia took the vital trade routes in these areas from the Romans. At the time, the Roman Emperor Aurelian was busy in Gaul (France) and wasn't really paying too much attention to what was going down. It wasn't until Zenobia decided to declare Palmyra independent of Rome that the sh*t hit the fan.

Aurelian wasn't about to take that lying down, particularly from a woman. At the final smackdown in 274, Aurelian beat Zenobia's forces but it took him at least two battles to do it. Zenobia was captured attempting to flee to seek help from the Persians. As a punishment, Aurelian forced her to walk through Rome in a parade featuring bears, tigers and other wild animals, wearing enough gold jewelry to outfit every rapper in the Middle East.

Despite her humiliation, unlike her noble ancestors Cleopatra and Dido, Zenobia still came out on top. Aurelian was impressed by her beauty and dignity. She negotiated a sweet little deal with Aurelian, which gave her a villa for herself and her kids near Tivoli. Zenobia married again to a Roman senator, had several daughters, and lived out the rest of her days in comfort as a prominent philosopher, socialite and Roman matron.

During her short-lived reign, Zenobia was known as a good ruler. She treated both Jews and Christians alike with dignity and respect. When she wasn't off conquering territory, she was establishing Palmyra as an intellectual center of learning, inviting prominent scholars and men of letters to her court. Whose to say what Palmyra could have become if Zenobia had been allowed to keep on ruling or if she had been content to have Palmyra just remain a small cog in the wheel of the Roman Empire. Instead Zenobia was ambitious for her country and longed to see it take what she considered its rightful place as a major power. And she almost succeeded. What is remarkable about Zenobia's story is how fascinated historians were by her story at the time. And she continues to fascinate writers to this day.

Beloved, by Bertrice Small
Zenobia (2005), by Haley Elizabeth Garwood
The Chronicle of Zenobia: the Rebel Queen (2006), by Judith Weingarten
Zenobia

Anne Gilbert said…
I knewc a little about Zenobia, whose name in Arabic, a form of which she may have spoken, is Zainab. Zainab is still a fairly common cname, in CArabic, for women in that part of the world. I think she is also important, at least in legend, to people in that part of the world, also. She sounds like a very interesting character.
Anne G
September 18, 2009 at 4:39 PM

Anonymous said…
Thank you for sharing such a fascinating tale... I have that Antonia Fraser book in my to-read pile - I think I'll have to move it up the list now!
September 18, 2009 at 8:25 PM

Judith Weingarten said…
Thanks Elizabeth, a little romantic but I'm always glad to hear other views about Zenobia.

@Anne, speaking of romance, you can read the Arab story of Zenobia (Zebba) on my Zenobia blog at The Zenobia Romance and its follow-up at Zenobia Romance II (Truth or Fiction).
September 19, 2009 at 4:20 AM

Elizabeth Kerri Mahon said…
You are welcome Judith. Since my first exposure to Zenobia was through a romance, I suspect I will always see her that way.
September 19, 2009 at 3:57 PM

Nina said…
I knew nothing about this women, but she sounds intresting. Thank you for telling us the story!
September 20, 2009 at 10:04 AM

Anonymous said…
i knew nothing at all about her until i read this and i must say she sounds like a very impressive and strong woman.
it's a shame she isn't better known today.
September 20, 2009 at 11:16 AM

Elizabeth Kerri Mahon said…
Thanks Nina and Adam. I hope you will check out the novels based on Zenobia's life. I can certainly vouch for both Haley and Judith's.
September 21, 2009 at 11:16 AM

saadat tahir said…
recently visited the marid fort...and then on the web led me to this fascinating tale of a warrior queen...
lovely narrative if a bit imaginative
loved reading it any way