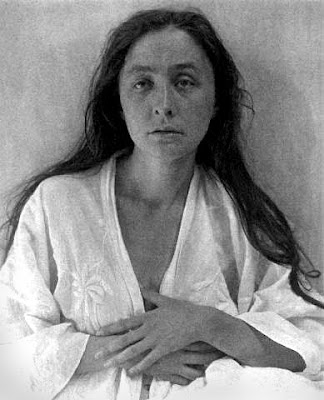 The film opened in 1916 at Steiglitz's gallery Studio 291. Without her knowledge, Steiglitz is showing several of her drawings without permission. She berates him and they argue about his actions. He convinces her that she has an amazing talent that should be shared with the world. He offers her his niece's apartment in NY, which she accepts reluctantly. She worries that there are strings attached to the offer, especially since Steiglitz is a married man with a child.

Steiglitz photographs O'Keeffe as they ket to know each other. At a society part, she meets art patron Mabel Dodge Luhan (played by Tyne Daly) among other luminaries of the literary/art world scene such as African-American writer Jean Toomer. After the party, Steiglitz and O'Keeffe become lovers. After being caught inflagrante delicto by his wife, Steiglitz leaves her and moves in with O'Keeffe. Soon they are married.

At an exhibition of Steiglitz's photography, Georgia discovers that he has included several nude photos of her, and worries that it will ruin her career as an artist (FACT: during this exhibition, O'Keeffe was not identified as the model in these photos at her request). They argue. Steiglitz meets a younger woman named Dorothy Norman and starts an affair with her, which hurts Georgia. She runs of with her friend Beck Strand to stay with Mabel Dodge Luhan in New Mexico where she is renewed and inspired in her art. Georgia spends increasing amounts of time in New Mexico which pisses off Steiglitz. They argue about her taking a commission to do a mural for Radio City Music Hall. She has a nervous breakdown and retreats back to New Mexico. Steiglitz has a heart attack which brings her back to NY. Georgia finally makes a break with Steiglitz and goes out to New Mexico for good (FACT: O'Keeffe didn't move permanently to New Mexico until 3 years after her husband's death. She generally spent half the year in New Mexico and half the year in New York.)

I wish I could give a wholehearted thumbs up to this film. It follows the usual biopic formula, boy meets girl, they fall in love, they fight, she creates art, he gets jealous, they break-up. The movie makes it seem as if Steiglitz and O'Keeffe fell in love instantaneously but in reality, Georgia went back to Texas to her teaching job after the exhibition in NY, and she and Steiglitz exchanged letters for a year before she finally decided to move to NY. Although Steiglitz did leave his wife soon after he and O'Keeffe became lovers, it took six years before they married, since his wife fought the divorce.

The movie is at its most interesting when it deals with O'Keeffe creating, particularly the scenes in New Mexico when she is exposed to a whole different way of thinking about art, and her work moves in a new direction. The least successful scenes are the ones where O'Keeffe and Steiglitz are fighting about his affairs, they smack of really bad soap writing. From my research, it was well known in the art world that Steiglitz was a womanizer, and he preferred relationships with much younger women. O'Keeffe was 28 when she met Steiglitz and he was 52 (which is glossed over in the movie). Dorothy Norman was not the first affair that he had while married to O'Keeffe. He had an affair with Beck Strand, wife of his friend Paul Strand. O'Keeffe ignored it because she felt it didn't interfere with their relationship.

More successful are the scenes where they argue over Georgia's career. During their marriage, Steiglitz staged an exhibition every year of O'Keeffe's paintings which had to be rough on her creatively. He definitely controlled every aspect of her career. The biopic could have made more of the fact that O'Keeffe's career began to eclipse his as he spent less time on his photography and more time promoting her as well as other artists.

As for the acting, Joan Allen is quite good as O'Keeffe. She resembles her slightly (although much thinner) and was wholly credible in the scenes where she is shown painting. Jeremy Irons on the other hand comes off less well. The role of Steiglitz is written as a cranky, selfish, willful, whiny old man. No one ages in this film, even though the film spans 30 years, until the end when we see an older Georgia in her studio in New Mexico. At times, the viewer has no idea what year it is either.

Still, if even one viewer, heads out to a museum to see a Georgia O'Keeffe painting, or to seek out photos of her work, the film will have done it's job.
Georgia O'Keeffe

Robin's Egg Bleu said…
I agree totally!!!! I was so looking forward to seeing this film, and it was lackluster at best. Not enough of her work shown...at least that would have added color.

I thought the movie's promo's were more interesting and dramatic than the actual movie.
September 21, 2009 at 6:12 PM

Enid Wilson said…
It is not showing here yet. Now I'm not sure if I will watch it...

Elizabeth Kerri Mahon said…
I give Lifetime props for actually producing this movie and the one on Chanel if only because unless you are an art lover you might not have heard of Georgia O'Keefe. I had high hopes for this movie because of the talent but very disappointed in the script.
September 23, 2009 at 10:57 AM

Anonymous said…
The costumes were spot on. The movie was not. Part of the problem was the time frame (not enough)and the train of never-ending commercials. In real life, their story was interesting enough. I didn't enjoy the ad-lib to keep non-art lovers enticed. I disagree about Jeremy Irons. I thought he made a better Stieglitz (ie) than Ms. Allen did a Georgia. But the script was not in his favor...not hers for that matter. But I do agree Ms. Allen is a very fine actor.

Listen...If a person, at this date, has never heard of Georgia O'Keeffe (2 F's) they either live in a cave, are too old to Know even their owm name, have not been born yet, or are married to their first cousin. Young school kids study her work.
September 25, 2009 at 11:52 PM

Elizabeth Kerri Mahon said…
They may have heard of her, or seen one of her paintings, but that does not mean they know anything about her. I had art classes in high school and I can tell you that we did not discuss painters. We mainly drew boxes (art was not really that big at my school). You would be amazed at how many people out there could not identify a Picasso, or have heard of any modern artists.
September 28, 2009 at 12:06 PM