September 12, 2009
Her name has come down through the centuries as euphemism for wicked women. 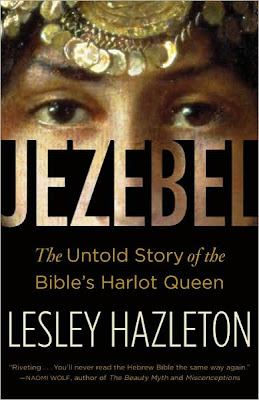 The dictionary definition of Jezebel: An evil, scheming or shameless woman; an immoral woman. Example: She’s an absolute Jezebel!

The 1937 movie starring Bette Davis called Jezebel depicts a spoiled and scheming Southern Belle who embarrasses her fiancee and family by wearing a scandalous red dress to a ball. She later redeems herself by going with her former fiancees who is suffering from yellow fever into quarantine.

In the Bible, she is depicted as a scheming, manipulative woman who leads the northern kingdom of Israel into ruin by inflicting her worship of heathen gods on the nation. But was this truth or fiction? In Lesley Hazelton's biography Jezebel, The Untold Story of the Bible's Harlot Queen, a different picture emerges not just of Jezebel but of the era of the two kingdoms Israel and Judea.


From the coverflap:
There is no woman with a worse reputation than Jezebel, the ancient queen who corrupted a nation and met one of the most gruesome fates in the Bible. Her name alone speaks of sexual decadence and promiscuity. But what if this version of her story, handed down to us through the ages, is merely the one her enemies wanted us to believe? What if Jezebel, far from being a conniving harlot, was, in fact, framed? Here at last is the real story of the rise and fall of this legendary woman—a radically different portrait with startling contemporary resonance in a world mired once again in religious wars.

It helps if one is familiar with the biblical story before reading Jezebel, although Hazelton does a magnificent job of telling the story. In a nutshell, Jezebel was a foreign princess, a Phoenician from the island city-state of Tyre who is married off to Ahab, the King of the northern Kingdom of Israel. It was a dynastic marriage, giving Israel access to international trade routes. Ahab is tolerant of Jezebel's polytheistic beliefs, which include worship of the gods Baal and Astarte, which brings down the wrath of Yahweh and his prophet Elijah.

Elijah and Jezebel struggle for power. He challenges 450 prophets of Baal to a test, and exposes their god as powerless, and then has them slaughtered which brings down Jezebel's wrath upon him. He flees Israel but not before he issues a fatwa against Ahab. After Ahab's death, Jezebel rules as Queen Mother until her son Ahaziah is old enough to rule on his own. When he is killed in battle, she rules through her other son Jehoram. However, Jezebel now has a new enemy in Elijah's successor Elisha. Like Cleopatra after her, Jezebel goes to her death like a Queen. Dressed to the nines, and heavily made-up, she sits on a chair out on her balcony to await her death, which is pretty horrific. She is torn apart by dogs until nothing is left of her but her head, hands and feet. Although she is depicted as a faithful wife, her religion is depicted as being one long orgy with the priests and priestesses copulating on altars etc.

What is remarkable about Hazelton's book is how she goes into detail of how the book of Kings came to be written, during the Israelites from the Kingdom of Judea's long exile in Babylon. The story of Jezebel and Ahab can be seen as an explanation for why the Northern Kingdom of Israel ceased to exist and the ten tribes of Israel that made up the kingdom were lost for good when the Assyrians conquered (or were invited in) Israel. In other words, since Ahab allowed idol worship into the kingdom, and was merciful to his enemies, the kingdom was weakened and became wicked.

Unfortunately for Jezebel, there are no surviving documents that give another point of view. Hazelton expresses the theory that because the Phoenicians not only were polytheistic but allowed women in priestly roles, there must have been something inherently decadent about the religion. Despite the fact that Jezebel was perfectly content to let the Israelites worshipped as they pleased, and respected their God, that wasn't good enough. She also gives the reader the history and background of the Phoenician kingdom that is immensely fascinating. They were a strictly maritime economy, building amazing ships, and basically inventing navigation as we know it. They also invented the alphabet.

Jezebel would have been seen as exotic and cosmopolitan compared to the Israelites. The monarchy and the wealthy nobles benefited from the alliance, but the little people, the farmers and landowners didn't. Hazelton points out that there is very little evidence of Jezebel's so-called wickedness apart from the story of Naboth, an owner of a vineyard near the palace that Ahab coveted. When Naboth refuses to sell the vineyard to the King, Jezebel takes matters into her own hands, and has him killed.

Hazelton uses the story of Jezebel to point out how the conflicts in the Middle East stem from this time. She uses her own personal experiences from traveling in the Middle East as well as her own personal translations of the Hebrew Bible to back up her thesis that Jezebel, while not totally an innocent, is not the wicked Queen that has been depicted over the centuries. She points out the problems with taking the bibilical story literally without examing the historical context. One of the more interesting facts that I learned from reading this book was a) the name Jezebel has come down to us in the name of Isabelle/Isabella and c) Dido, the Queen of Carthage was Jezebel's great niece.

I would highly recommend this book to anyone interested in the pre-Christian world, but also how the story of powerful women can be distorted. This book is not for everyone. Hazelton sees parallel's Elijah's intolerance with the fundamentalist views prevalent in the current Middle East. Although revered by three different religions (Christianity, Judiaism, and Islam), he's really the bad guy in Hazelton's book.
Jezebel