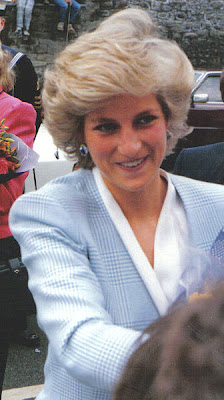 From the press release:

"Making its East Coast debut, and returning to the United States for the first time since 2007, the award-winning exhibition explores Diana's childhood, her engagement to HRH
Prince Charles, their royal wedding, their children, and Diana's life and work as a global humanitarian and model citizen. Diana: A Celebration is on loan from the Althorp Estate,
the Spencer Family’s 500-year-old ancestral home in England."

“This exhibition is a remarkable tribute to Princess Diana’s life and work,” said National Constitution Center President and CEO Linda E. Johnson. “Because she was admired by millions across the globe, we expect Diana: A Celebration to have broad appeal, which will allow the Center to expand its audience and, in turn, introduce more visitors to the remarkable stories of ‘We the People’ celebrated here every day.”

Tickets go on sale today and are pretty-pricey, $23 dollars. You can save money by joining the National Constitution Center for $35 and the ticket is free. I'm hoping to attend on October 13 so that I can also attend Tina Brown's lecture that evening.
Princess Diana

Native NYer said…
I haven't thought of Diana in years. The exhibit sounds great with its 9 galleries. That's a lot of stuff. I'll have to see how I can fit it into my schedule. I wonder what she would think of her sons today. (She would be proud, of course.) I wish Michael was here to see it with us. He would have had lots of commentary; better than any tour guide. He would have been in heaven.
September 8, 2009 at 1:59 PM

Janella said…
It looks like the exhibition will only be at the National Constitution Center. I would love to see it, but I live in Denver.
September 8, 2009 at 5:16 PM

Elizabeth Kerri Mahon said…
It's a shame that it's not touring the country. I have a feeling that since it's a permanent exhibition at Althorp, it's only available during the months that the house is closed to the public which is why it may not be touring.
September 9, 2009 at 10:28 AM