Hatshepsut: The Lost Queen of Egypt 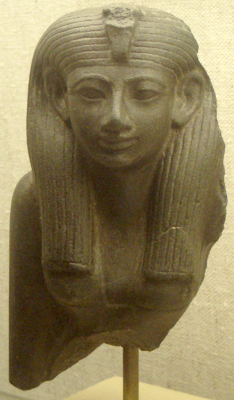 Her name may sound like a sneeze but she was one of the most successful and powerful rulers of Egypt. Although Hatshepsut (or Hatchepsut) was not the first woman to rule Egypt, she was the first to rule in the guise of a man. The ancestress of Tutankhamen has left as many questions as to her reign as there are answers. The regent for her step-son nephew Thutmose III, what was it that made her decide to seize power? Did she have an affair with Senenmut, her chief advisor? And lastly led to the almost total destruction of her name and image after her death?

Even the dates of her life and her reign are subject to debate but the ones that fit are 1479 BC- 1458 BC. The only thing that we do know for sure is that she was the fifth Pharaoh of the 18th dynasty which united Egypt after almost 100 years of foreign rule by the Hyksos. Hatshepsut was the oldest daughter of Thutmose I, a general who had married into the royal line. At the age of 12, she married her half-brother Thutmose II to fortify the royal lineage. However, they had only one child, a daughter named Neferure. Another minor wife, Isis, would provide the heir.

Thutmose II didn’t reign long; he may have died of heart disease at a young age. No one is sure how old Hatshepsut was when he died. She may have been anywhere from 15-20 years old. Since his son, Thutmose II was only a kid; Hatshepsut assumed control as regent until he came of age. This was common in Egypt for a Queen mother or former Queen to take control as regent until the heir came of age. During her husband’s reign, Hatshepsut had apparently been a model consort. Images of her at the time show her in her rightful place behind her husband. She was given the title of ‘Great Royal Wife,’ a new title that was unique to the 18th dynasty.

In the beginning, Hatshepsut acted on her step-son’s behalf. She was careful to abide by the conventions of previous Queen Regents. Soon there were signs that things were going to be a little different. After seven years, she ‘assumed’ the role of Pharaoh. She didn’t rule completely on her own. Thutmose III was named her co-regent, but effectively she was the power in Egypt for the next 21 years. Her daughter Neferure took on the role of consort, performing the same duties that her mother had done during her husband’s reign. Why did Hatshepsut take on the role of Pharaoh? Some historians used to believe that Hatshepsut seized power for herself, that she was ruthless and full of ambition. That she was a wicked step-mother who pushed the rightful ruler aside. Contemporary historians believe that there might have been a threat, perhaps from a minor branch of the royal family or from an outside threat that led her to believe that she needed to solidify the monarchy by taking power.

Hatshepsut took the new name Maatkare. From now on all images of Hatshepsut would be in her new role as Pharaoh, wearing male clothes and the false ‘beard of wisdom.’ Hatshepsut gained the support of powerful men at court, including Senenmut, who was a triple threat, serving as chief steward, architect and tutor to her daughter Neferure. Senenmut’s role in Hatshepsut’s reign appears to have been controversial. He was a commoner who rose to great power. There is no proof one way or the other that they were lovers, but if they were, it would explain why after her death, so much effort was made to remove her reign from official documents.

During her reign, Hatshepsut was one of the greatest builders in Egyptian history. She raised and renovated temples and shrines from Sinai to Nubia. Vast amounts of Karnak temple appear to have been built by Hatshepsut as well as the Deir el Bahri temple. She commissioned hundreds of statues of herself and left accounts in stone of her reign, even her thoughts and hopes. She established trading relationships that had been lost during the occupation by the Hyksos, and brought great wealth to Egypt. Her reign was a time of peace and prosperity for Egypt. While her father and step-son were great generals, Hatshepsut felt no need to go out and conquer new territory but she was fully prepared to protect Egypt’s territories from foreign invasion. She oversaw the preparations and funding for a mission to the Land of Punt. The Egyptians returned from the voyage bearing thirty-one live frankincense trees, the roots of which were carefully kept in baskets for the duration of the voyage. It is reported that Hatshepsut had these trees planted in the courts of her Deir el Bahi mortuary temple complex.

Her step-son’s education was not neglected. He was trained as a soldier, and Hatshepsut put him in charge of the army. Contrary to the myth that Thutmose III resented Hatshepsut, he seemed content to allow Hatshepsut to rule. He could have staged a military coup, but he didn’t. Although there is some evidence that Hatshepsut was training her daughter Neferure for power, perhaps because Thutmose II had died young, there is no evidence that she planned to replace Thutmose III with her daughter. Some historians believe that Hatshepsut married her daughter to Thutmose III, but there is no evidence of this, although it is clear that Neferure possibly died before the end of her mother’s reign. If she and Thutmose III were married, they had no children, because his heir Amenhotep was born of another wife.

While there have been rumors that perhaps Thutmose III or other enemies might have had Hatshepsut murdered, Hatshepsut actually died due to an abscessed tooth. She was perhaps in her late forties or early fifties when she died. Historians have long believed that Thutmose III in an act of revenge after her death removed Hatshepsut’s name from the historical record. However due to new evidence, it appears that her name wasn’t removed until the end of Thutmose III’s reign, when he was co-regent with his son and heir Amenhotep II. Not only did Thutmose III remove images of Hatshepsut he also claimed many of her accomplishments for his son. This was done probably in an attempt to have the record read that the throne had come down to Amenhotep II in a strictly patrilineal line. Images of Hatshepsut as Queen however were kept.

In 1903, Howard Carter of later King Tut fame excavated her tomb in the Valley of Kings but her mummy was not found. In March 2006, Zahi Hawass, a leading archeologist, claimed that Hatshepsut’s mummy had been found, it had been misplaced in a Cairo Museum.

There is still much we may never know about Hatshepsut but her name and her reign as one of Egypt’s most powerful and important Pharaoh’s has been restored.

burlgirl said…
Great article on Hatshepsut. I've always been interested in her. I've never gotten my mind around how erasing her memory when Thutmose III was older helped with his heir, Amenhotep II. Since Hatshepsut had no heir of her own, there should have been no threat to AII. Any ideas on that?

Elizabeth Kerri Mahon said…
Thutmose III wanted her accomplishments for his son. Also, he wanted their to appear that the line of succession hadn't been broken, that it went from Thutmose II to the III to Amenhoptep. That's at least the theories that I have heard. God forbid that a woman achieve anything! I wonder how much of it had to do with their advisors.
October 14, 2009 at 5:50 PM