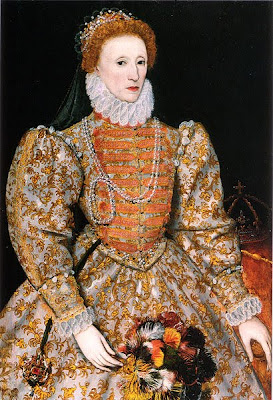 On this day in 1533, Queen Anne Boleyn gave birth, not to the son she had promised Henry VIII but to a daughter, the Princess Elizabeth. She would remain her father's heir until her mother's execution when she was not quite 3 years old. Soon she would be made illegitimate and cut from the line of succession by her brother Edward VI. After her father's death when she was 13, she was sent to live with her step-mother Catherine Parr, after her marriage to Thomas Seymour. It was there that Elizabeth learned that men could be unfaithful jerks. Seymour got into the habit of coming into Elizabeth's rooms in his nightshirt, playing a little slap and tickle until his wife found out and sent Elizabeth away. Seymour ended up losing his head.

At the age of 25, in 1558, Elizabeth was named Queen after the death of her half-sister Mary I. For 55 years, Elizabeth reigned in England in what is now called the Elizabethan era, the Golden Age of England. During her reign, the theater flourished with such names as Marlowe, Shakespeare, Ben Johnson, among others still being performed today.

As she grew older, Elizabeth became famous for her virginity, ''The Virgin Queen,' and a cult grew up around her which was celebrated in the portraits, pageants, and literature of the day. Scholars still debate the truth of her virginity. When it came to governing, Elizabeth was more moderate than her father and siblings. One of her mottoes was "video et taceo" ("I see, and say nothing"). It was a smart strategy, it often saved her from political and marital misalliances, but it was one that was viewed with impatience by her counsellors. Elizabeth had learned the lesson of what not to do from her sister's reign, the short reign of her cousin, Lady Jane Grey, and later on from the reign of Mary, Queen of Scots. Being a Queen was a precarious position, but Elizabeth was nothing if not a survivor.

During her reign, she kept the country guessing as to whom she might marry, leading suitors a merry dance, as she accepted their attentions, without every sealing the deal. The one man she probably seriously wanted to marry was Robert Dudley, her old childhood friend, who she created Earl of Leicester. However Leicester was married when they fell in love, and the mysterious death of his wife Amy, and the antipathy of Elizabeth's councillors meant that he didn't have a chance. Elizabeth kept him at court though, accepting his attentions, even offering him to Mary, Queen of Scots as a potential husband. Later on he married her cousin Lettice Knollys behind her back, pissing Elizabeth off royally.

Her reign is most famous of course for defeating the Spanish Armada, but she also expanded trade and territories overseas. Virginia was named after, and the lost colony of Roanoke founded. It was also marked by the execution of her cousin Mary, Queen of Scots, and by Catholic rebellions. Under Elizabeth, the Church of England was firmly established. By the end of her long reign, England was tired and so was Elizabeth. But her reign gave the kingdom a stability it hadn't had during the short reigns of her brother and sister. Elizabeth was not only the monarch but also the symbol of England.

Over 400 years after her death in 1603, Elizabeth is even more popular then she was in her lifetime. We feel that we know her, even if we have never read a biography or seen a movie about her. Everyone has seen the iconic portraits. My Norton anthology of English literature that I used in high school had the Gloriana portrait on the cover. In the spate of 5 years, Cate Blanchett, Helen Mirren, and AnnMarie Duff all played Elizabeth in both movies and television, joining Glenda Jackson, and Bette Davis in the ranks of great actresses who have played Elizabeth I. She's even been immortalized in the operas of Donizetti and the musical The Pirate Queen. More books seem to come out daily about Elizabeth or set at the Elizabethan court. There is even new web-site The Elizabeth Files devoted to Elizabeth I. Only Jane Austen is probably as fascinating to readers as Elizabeth I.

In honor of Elizabeth's birthay, here is a list of some of my favorite books and movies about Elizabeth.

Fire Over England (1937): Noted chiefly for starring Laurence Olivier and Vivien Leigh, it also features a great performance by Flora Robson as Elizabeth

Elizabeth R: This miniseries starred Glenda Jackson as the definitive Elizabeth I (until Cate Blanchett). Now available on DVD.

Elizabeth: This film starring Cate Blachett is one of my favorites, even with all the historical inaccuracies that litter the script. However it is a wonderful portrayl of Elizabeth's first years in power.

Elizabeth I: HBO/Channel 4 miniseries starring Helen Mirren as Elizabeth, Jeremy Iron as Dudley and Hugh Dancey as Essex. The last years of Elizabeth I's reign. Came out the same year that Mirren played Elizabeth II in The Queen. Both Jeremy Irons and Helen Mirren won Emmies for their portrayals.

Books:
David Starkey: Elizabeth, the Struggle for the Throne
Victoria Holt: My Enemy, The Queen
Alison Weir: The Lady Elizabeth

Do you have a favorite book or film about Elizabeth?
Elizabeth I

Daphne said…
My favorite book about Elizabeth is Legacy by Susan Kay. It is currently out of print (although available used) but I've heard that it will be republished next year.
September 7, 2009 at 2:45 PM

F. Solomon said…
elizabeth and essex might be one of my favorite films in the entire world--is there ever a time one does not love bette davis???
September 7, 2009 at 3:57 PM

premierludwig said…
A most wonderous piece you have written. Tis impossible to choose a favourite film, but I love the fire of The Golden age and the defiance of Young Bess.

Janella said…
I like "The Life of Elizabeth I" by Allison Weir. I like both "Elizabeth" with Cate Blanchett, and "Elizabeth I" with Helen Mirren as well.
September 7, 2009 at 11:54 PM

robin said…
I love all the Plaidy (Victoria Holt) books that feature Elizabeth -some as the main character and some as a supporting character- but she is always facsinating!
her wit and the merry game she played with her suitors- even playing other countries like chess pieces- is always amazing!
September 8, 2009 at 1:33 AM