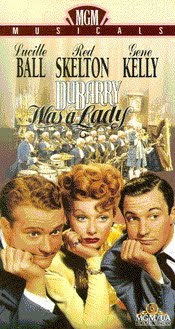 A hapless nightclub hat check boy, Louis Blore (Red Skelton), loves nightclub singer May Daly (Lucille Ball), but she is in love with Alec (Gene Kelly). And May she loves money. When Louis whens the Irish sweepstakes, he sees his chance to win May. She agrees to marry him but tells him that she doesn't love him. Louis agrees anyway. However, Alec is not ready to give May up, so Louis's friend convinces him to slip Alec a Mickey Finn. Louis mistakenly drinks the Mickey Finn intended for Alec, falls asleep, and dreams he is King Louis XV of France, and that May is Madame du Barry, and that Alec is a dashing rebel called the Black Arrow. Eventually after various entanglements (including the Dauphin shooting the King in the posterior with a bow and arrow), Louis wakes up and realises that Alec is the man for May.

That's the plot of the 1943 MGM musical, based on a 1939 Broadway musical with music by Cole Porter, starring Ethel Merman as May. The movie version jettisons most of the music (only 3 of the songs from the musical are used), and delays the dream sequence until almost 50 minutes into the movie. I'd heard about this musical for years but never got around to watching the movie version until recently.

The musical has very little to do with the historical Madame Du Barry. In the movie version, she's his mistress in name only. While Louis showers her with gifts, she has put out yet (very unlike the real Madame Du Barry!). The movie also has nothing to do with historical accuracy either. Tommy Dorsey's orchestra shows up as an 18th century version of a Big Band orchestra, and the costumes are 18th century musical comedy than the real thing.

This movie was the first musical from MGM filmed entirely in technicolor and the first to feature Lucille Ball as a redhead. She dyed her hair for the role and decided to keep it. If you only know Lucille Ball from I Love Lucy, she is a revelation in this film. She plays May Daly as the proverbial gold-digger with the heart of gold. No matter how hard she tries to marry for money, her heart just won't let her. Gene Kelly doesn't really get to show off here the way he does in subsequent MGM musicals. One gets the feeling that the studio is still trying to figure out what to do with him. Red Skelton is the star of the film, showing off physical comedy skills and a sweetness that makes him more than a cheaper version of Danny Kaye. His reactions when he discovers that he has traveled back (or so he thinks) to the 18th century are hilarious. However, the movie is almost stolen by Zero Mostel in his film debut as Rami the Swami.

I highly recommend this film as an entertaining diversion for a rainy afternoon, particularly if you like musicals.
Madame Du Barry