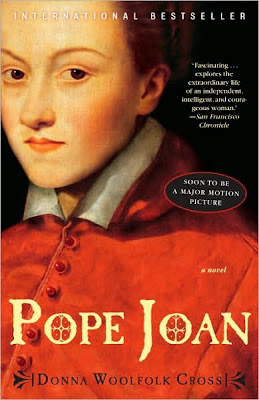 "Engaging . . . Pope Joan has all the elements: love, sex, violence, duplicity, and long-buried secrets."--Los Angeles Times Book Review
For a thousand years men have denied her existence--Pope Joan, the woman who disguised herself as a man and rose to rule Christianity for two years. Now this compelling novel animates the legend with a portrait of an unforgettable woman who struggles against restrictions her soul cannot accept.When her older brother dies in a Viking attack, the brilliant young Joan assumes his identity and enters a Benedictine monastery where, as Brother John Anglicus, she distinguishes herself as a scholar and healer. Eventually drawn to Rome, she soon becomes enmeshed in a dangerous mix of powerful passion and explosive politics that threatens her life even as it elevates her to the highest throne in the Western world.
"Brings the savage ninth century vividly to life in all its alien richness. An enthralling, scholarly historical novel."--Rebecca Fraser, Author of The Brontes
Q. Welcome to Scandalous Women Donna! Can you tell us a little about yourself and how you came to writing?
I'm the daughter of two writers: my father, William Woolfolk, wrote 20 novels and won an Emmy for his scripts on the the TV show "The Defenders". My mother, Dorothy Woolfolk, wrote the "Donna Rockford" detective series. They met when both were working in the Golden Age of Comics--my father writing "Superman" and my mother writing "Lois Lane". (is that "meet cute" or what?). I saw what they endured to write--the long hours, the "don't-get-out-of-your-pajamas-until-noon" routine, the despair when creation was going badly--and decided that the writing life was definitely not for me!

But after graduating with a degree in English from the University of Pennsylvania, I realized that I was basically unemployable--for everyone already spoke English! I tried a stint at a publishing house in England for a year--but in the end decided that I didn't want to expatriate myself for life. I tried a year at a Madison Avenue advertising agency in NYC--and decided that helping create toilet paper commercials wasn't the way I wanted to spend my life. I taught writing for many years at an Upstate New York College and while there was much that I found enjoyable and rewarding in this occupation, the "paper load" was crushing. In the end, I realized that the best (non-criminal) way for me to earn a living was by writing.
Q. Saint Joan is much better known than your heroine, Pope Joan. Why is that, and what differences do you see between these two women?
Saint Joan, also known as Joan of Arc, was an admirable woman, no doubt about it. But she was a much more typical "woman religious" than my heroine. Joan of Arc was an ignorant peasant, unable even to read or write. She had to mark the documents that consigned her to the flames with an "X", for she couldn't sign her name. She was also a virgin--a very important component of female sainthood (in France, she is called "Jeanne la Pucelle"--Joan the Virgin). She had a mystical connection to God; He spoke to her and told her what to do. This kind of mystical connection with God is very typical of female saints--and it in no way overturns the traditional view of women as the "lesser of the sexes"--for the Bible says that God speaks preferentially to "the least among us".

Lucy said…
Fantastic interview! The more I read about Pope Joan, the more I'm fascinated. And- I love the personal details interjected into this interview...it's always nice to learn a bit about the author's background ( I love the part about how Donna's parents met!). Thanks Elizabeth and Donna:)
August 28, 2009 at 11:03 AM

www.acehbarat.info said…
how are u friends
Hello i'm rose
just comment u and drop EC (please drop and follow me too)
thanks..nice blog...
miss U

the free spirit said…
Hi...I am such a history nut, that I got hooked to your blog easily :-)
I just saw a trailer for the German Movie based on this book. Looks interesting but I am pretty sure it wont get distributed in the US :-(