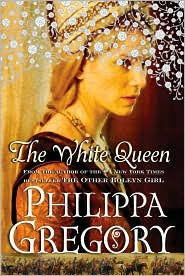 After writing six bestsellers about the Tudors and one about Mary, Queen of Scots, Philippa Gregory has now turned her attention to their predecessors on the throne of England, The Plantagenets. Her new book The White Queen (on bookshelves tomorrow if not already at Borders) tells the story of Elizabeth Woodville, a widowed beauty who captures the eye of the young King Edward IV of the House of York. Elizabeth marries him in secret and rises to become an ambitious and formidable Queen. Elizabeth and Edward's happy marriage (despite his frequent whoring around which Elizabeth accepts with a fortitude unusual for most women), works as a counterpoint to the frequent wars as Edward tries to consolidate his hold on the throne as the battles between the House of Lancaster and the House of York rage on.

This is not the first historical novel to feature Elizabeth Woodville as a heroine. Rosemary Hawley Jarman as well as Jean Plaidy (Victoria Holt) have also mined this rich period of history. Gregory includes the legend of the water goddess Melusine as a background to Elizabeth's story. Legend has it that Dukes of Burgundy (as well as the de Lusignan's) are descended from the goddess. Elizabeth's mother Jacquetta is from the House of Burgundy and teaches Elizabeth the old ways of magic. Elizabeth proves to be a complex heroine, who is not afraid to take revenge against those she feels have disrespected her family. As most history buffs know, Elizabeth's two sons are taken from her to the Tower of London where they are lost to history. Was it Richard III who had them killed or Buckingham and Henry Tudor. Gregory provides a credible solution to this historical mystery as well as weaving another legend into the story. The novel ends just before the Battle of Bosworth leaving the reader gasping to find out what happens next.
The White Queen is the first in a planned trilogy about the Plantagenets and I am eager to see who Gregory writes about next. I have not always been an ardent fan. I had huge problems with The Other Boleyn Girl, but I thoroughly enjoyed The White Queen. Once you start reading, it is hard to put the book down. Who knew that a novel about The War of the Roses could be such a page turner, but Gregory does a remarkable job of keeping the pace going without sacrificing the characters. Edward IV comes across as incredibly likeable, a good warrior with a soft spot for his family which causes him trouble in the years ahead. I can see why some historians have seen Edward IV and Elizabeth as sort of an English Macbeth and Lady Macbeth. Elizabeth is formidable in her strength but she is also an incredible mother, who will defend her cubs against any danger, and a shrewd politician. Although I know how the story ends, I rooted for Elizabeth all through the book.
But the character I found the most intriguing was Gregory's interpretation of the young Princess Elizabeth (soon to be the wife of Henry Tudor and the mother of Henry VIII). The young Princess is feisty and complex, not afraid to stand up to her mother. I found it a refreshing change from the way that Elizabeth is usually written, as more passive and dominated by Henry VII. I look forward to reading the next book in the trilogy.
You can buy the book at Barnes & Noble and Amazon.
Edward IV Elizabeth Woodville

Anonymous said…
i adore historical fiction but am ashamed to confess i've not yet read any Philippa Gregory...something which i intend to put right at the earliest opportunity.
i'll be sure to return for more of your well-written recommendations!
August 19, 2009 at 7:12 AM

Elizabeth Kerri Mahon said…
Thanks adamantixx. The book is really awesome and worth picking up a copy.
August 19, 2009 at 11:11 AM

BurtonReview said…
I am glad the book is getting so much attention. I didn't like The Other Queen and was glad this one was so much better! Now I am looking forward to her next book.
Thanks for the wonderful review.
August 19, 2009 at 11:33 AM

caroline watson said…
This sounds like a good book and if its in Gregory's thrilling style,and covering time thats fascinating it really will be a hit.
I am look inf forward to reading it being from the UK although I had not heard of it it must be due to being released everywhere soon.
My view is for everyone that likes history and a thrilling story weaved in to go and get it to read as soon as it is on sale.
August 19, 2009 at 8:17 PM

Elizabeth Kerri Mahon said…
Caroline, I think the book has been released in both the US and the UK. I would run into your local bookstore and see when it might be coming out. It is definitely one of her better books. I hope that people are not put off by the fact that they might not be as familiar with the story apart from possibly having read Richard III for English class.
August 19, 2009 at 10:25 PM