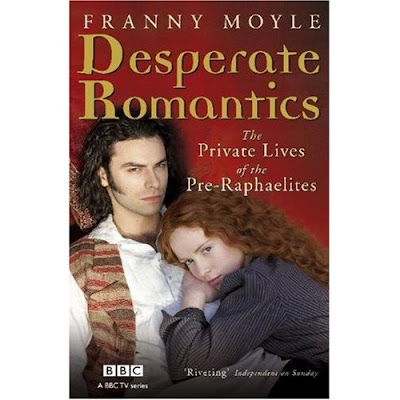 Recently I picked up a copy of the English magazine The Tatler which had a huge photo of a new BBC mini-series called Desperate Romantics about the lives of the Pre-Raphaelites. Since I wrote a post about Lizzie Siddal, I was curious to find out more information about the show. Fortunately, there is such a thing as Google, I found a web-site for the show here as well the BBC Website. Here is a description of the program. Also interviewd with two of the actors Rafe Spall and Sam Barnett at the Telegraph and one with Zoe Tapper who plays Lizzie at Digital Spy UK.
BBC Two’s exciting new six-part drama, Desperate Romantics, set in the throbbing heart of 19th-century industrial London, follows the adventures of three men who created what would become one of Britain’s most important art movements: the self-styled “Pre-Raphaelite Brotherhood”. Starring as the maverick group of English artists, their associates and muses are: Aidan Turner (Being Human, The Clinic), Rafe Spall (A Room With A View, Hot Fuzz), Tom Hollander (John Adams, Pride And Prejudice), Samuel Barnett (Beautiful People, The History Boys), Zoe Tapper (Survivors, Demons), Amy Manson (Torchwood), Sam Crane (Church Going) and Jennie Jacques (The Bill).

Amidst a backdrop of alleys, galleries and flesh-houses of 19th-century industrial London, Desperate Romantics follows the life and love affairs of the Pre-Raphaelite Brotherhood, a group of revolutionary artists as well-known for their intertwining love lives as for their ground-breaking paintings. The scandalous love triangles with their models became the subject of much gossip among their contemporaries, particularly as these relationships often crossed the class barriers of polite Victorian society.
Rafe Spall stars as William ‘Maniac’ Holman Hunt, a founding member of the Brotherhood; Tom Hollander plays the influential art critic and patron John Ruskin; Aidan Turner is Dante Gabriel Rossetti, notorious for seducing his models; Samuel Barnett plays John Everett Millais, whose relationship with Ruskin’s wife, Effie, played by Zoe Tapper, created fevered public speculation; Amy Manson plays Rossetti’s true love Lizzie Siddal, the model for Millais’ most highly regarded painting, Ophelia; Sam Crane plays Fred Walters, the group’s loyal friend and diarist; and Jennie Jacques plays Annie Miller, the prostitute whose relationship with Hunt has dramatic repercussions.

Kate Harwood, Controller, Series and Serials, BBC Drama Production, says: “Desperate Romantics paints a modern, vivid and irreverent portrait of a group of young painters whose attitude to the establishment makes them comparable to the punks a hundred years later.” 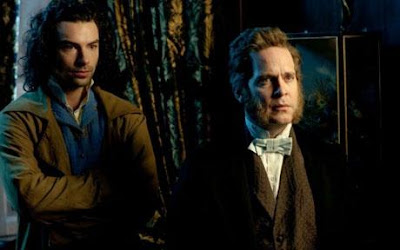 The actors all look young and sexy and the costumes gorgeous. After I wrote my post on Lizzie Siddal, I began to wish that someone would make a miniseries out of their story and here it is. I've read some reviews that say the production takes some historical liberties, which I know is going to tick me off but I'm willing to give it a chance. Since I am blessed with a region free DVD player, I will be reviewing this series as soon as it comes out on DVD. However, I just discovered that episode 2 is up at YouTube, so I'll have to check it out. I will also in the upcoming months be writing posts about Jane Morris and the love triangle between Millias, John Ruskin and his wife Effie Ruskin, one of my favorites because it has a happy ending.

Bearded Lady said…
oh this looks something like I would love. But what is a region free dvd? And do you know if the dvd will be released in the US?
August 6, 2009 at 11:00 AM

Sara Poole said…
"Desperate Romantics" looks wonderful; exactly what I'm in the mood for. I bought a region free dvd player to watch the wonderful Spanish series on the Borgias, which has finally been issued for the US market. Hope to have another good use for it soon with this.
August 6, 2009 at 11:41 AM

Anonymous said…
Amy Manson has done a wonderful job as Lizzie Siddal, but I am not too thrilled with their portrayal of Rossetti. The program is very tongue in cheek and I really could do without the fictional character "Fred Walters" that they've created. But other than that, it is very entertaining. Hopefully it will create some fresh interest into Pre-Raphaelite art and the fascinating lives of those involved with the Pre-Raphaelite circle.
There are a few youTube clips at http://www.lizziesiddal.com and you can find an insightful critique of each episode (so far) at http://www.thebeautifulnecessity.blogspot.com
August 6, 2009 at 11:55 AM

Elizabeth Kerri Mahon said…
Hi Bearded Lady, a region-free DVD player means that you can play DVD's from any region. Most DVD's sold in the states are I think region 2 and Europe is Region 1 or vice-versa. I bought mine in a small DVD store in Greenwich Village. I have no idea when or if Desperate Romantics will be released in the US.
August 7, 2009 at 2:12 PM

Sara Poole said…
Bearded Lady, you can look on line for hacks to unlock players. I haven't done this myself because hardware intimidates me (I'm much better with software) but I know people who have and swear it works. I bought my region-free player on ebay. It's the same Philips you'll find in any Walmart except it plays any region. If memory serves, it was about $10.00 over the Walmart price, which was worth it for the hack.

A region-free DVD player is very useful if you're studying another language and want to watch videos in it. It's also great in cases where the powers-that-be decide not to bring out a program in the US market or delay several years doing so.
August 7, 2009 at 8:10 PM

Elizabeth Kerri Mahon said…
Sara, that's the same region-free DVD player that I have. It's wonderful isn't it? So many great TV shows and movies from the UK never make it over here. Since I've had the DVD player, it's hard to keep me from ordering stuff from Amazon.co.uk!
August 8, 2009 at 11:42 AM

Louise Fury said…
Oohhh this looks fabulous.
I have a DVD player that I uncoded and it plays DVDs from all over. I recently watched Young Elizabth on it. I think I got it at Target for like $35.
August 8, 2009 at 11:57 AM

Sara Poole said…
Elizabeth, I've been seriously hooked on Amazon UK going back to when release of the US version of the second Harry Potter book was lagging months behind the UK edition. Turned out I was one of thousands who jumped on Amazon UK and ordered it. Scholastic tried to stop Amazon UK from filling the orders and did get them to ship no more than five copies per. After the hoopla about that,I thought release schedules would be synchronized across the board but incredibly that still hasn't happened.
August 8, 2009 at 4:30 PM

dave hambidge said…
I am unable to comment on the true historical accuracy of this series, BUT it is emminently viewable and one of the very few progs on Brit TV worth watching at the moment.

The actors seem to be well cast and give committed perfomances, esp Amy Manson as Lizzie Siddal, wow.

Do try to get a look, by methods fair or foul!

Elizabeth Kerri Mahon said…
Thanks, Dave. I've already pre-ordered the DVD. I can't wait to see it and to review it here on Scandalous Women.
August 10, 2009 at 10:09 AM

dave hambidge said…
For other readers the DVD is issued in UK on 28 September 2009 through BBCShop online. For North America go to BBC America Shop or BBC Canada Shop, both online. Price around 20 GBP I believe.
August 11, 2009 at 12:58 PM

dave hambidge said…
May I add a small warning to my previous review of this TV drama? Episodes 4 and 5 have contained numerous sexual acts fairly vividly portrayed. I am not a prude (quarter of a century of clinical psychiatry opened my eyes somewhat)and I am not directly questioning whether the frequent couplings have added to the understanding of the story. I'm just letting folk know.

I suppose this may increase or decrease its popularity?

BTW Any chance of moving the recent posting blog tool up the front page, it took me ages to find it!

Anonymous said…
I really enjoyed it and have been reviewing each episode on my blog. Overall, I think the series was pretty good albeit very inaccurate. Lizzy started off well and very sympathetically but became intensely annoying as the show went on, while Rossetti became increasingly nasty.

The last episode was shown last night and I got the impression that they were leaving it open for a sequel. :)
August 26, 2009 at 4:17 AM