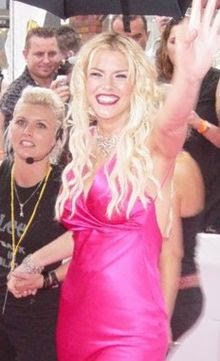 Just when you thought you’d heard everything, it was recently announced that the story of Anna Nicole Smith was being turned into opera, to be staged at Covent Garden in London 2011 by the same creative team who brought Jerry Springer the Opera to life. "It is not going to be a horrible, sleazy evening," Elaine Padmore, Covent Garden's director of opera told the Guardian newspaper. "It is not going to be tawdry; it is going to be witty, clever, thoughtful and sad. It is not just a documentary about her, but a parable about celebrity and what it does to people.” Since opera houses are filled with larger than life personalities, it seems the perfect place for Anna Nicole.

I certainly will be making my vacation plans to attend. It boggles the mind as to who they are going to get to play Anna, Howard Stern, and Larry Birkhead, not to mention Hugh Hefner. I've seen Jerry Springer the Opera, and it was a night I will never forget (David Soul from Starsky and Hutch played Springer).

What I want to know is if the writers are going to include the incident of the Ghost and Ms. Smith. Anna would pretty much say or do anything for publicity. One of the more bizarre stories that she told was the one of her having sex with a ghost. As she told FHM magazine, “A ghost would crawl up my leg and have sex with me at an apartment a long time ago in Texas. I used to think it was my boyfriend, and then one day, I found it wasn’t. I was freaked out at first about it, but then I was, like, well you know what? He’s never hurt me and just gave me amazing sex, so I have no problem.”

Anyone else intrigued by the idea of Anna Nicole the Opera?

Elizabeth Kerri Mahon said…
I don't know. It could be interesting. I'm imagining a chorus line of Playboy Bunnies doing a kick-dance when she becomes Playmate of the Year.
August 15, 2009 at 10:42 AM