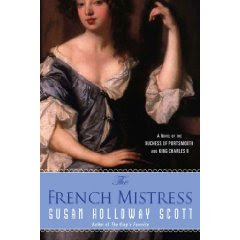 Scandalous Women is pleased to welcome Susan Holloway Scott, author of The French Mistress today! Remember anyone who leaves a comment will be entered to win a copy of her new book.

Here is a brief description to whet your appetite:

The daughter of a poor nobleman, Louise leaves the French countryside for the court of King Louis XIV, where she must not only please the tastes of the jaded king, but serve as a spy for France. With few friends, many rivals, and ever-shifting loyalties, Louise learns the perils of her new role. Yet she is too ambitious to be a pawn in the intrigues of others. With the promise of riches, power, and even the love of a king, Louise creates her own destiny in a dance of intrigue between two monarchs—and two countries.

Tell us a little about yourself, what is your background, and how long have you been writing before you were published?

I graduated from Brown University with a degree in art history. It was at Brown that I learned the magic of working with primary sources, of being able to reach back through centuries of opinions to squirrel out the truth about the past. I loved art history and still do, but didn’t want to make a career of it, and so I went into graphic design and public relations. Public relations proved to be a wonderful background for fiction writing.
Louise de Keroualle Susan Holloway Scott

Jessica's thoughts said…
I never knew that Louise de Keroualle was a real person. I read another historical fiction book, Dark Angels, where she is mentioned, but I did know if she was a real person or not. I did not know very much about Charles II or his court either, and so, I've learned something new.

Gwynlyn said…
I read and enjoyed the Miranda Jarrett books (they are on my keeper shelf) and wondered why I've found no more. Now I know.

Margaret Porter said…
Susan, I'm about 1/3 through the novel and am loving it. Louise is such an interesting character in her own right, and her story a contrast to those of Barbara and Nell.

Thanks for the glimpse inside your process and the insights about the era.
July 2, 2009 at 4:04 PM

Susan Holloway Scott said…
Susan here, stopping by --many thanks, all, for the wonderful comments!

Jessica -- While the main characters in "Dark Angels" are fictional, Karleen Koen did incorporate many real historical figures as well, including Louise de Keroualle. In most novels (and histories), she's usually not particularly endearing;I hope in "French Mistress", you'll find a more sympathetic side to her!

Gwynlyn -- Always good to hear from a Miranda-fan! There is one more Miranda Jarrett floating around the the pipeline at Harlequin Historicals, the last of the "Love on the Grand Tour" series. They haven't set a definite date for publication yet, but I'm guessing probably early next year. And yes, I know what you mean about the HEA. That was probably the hardest thing to give up when making the shift from romance. Real life isn't nearly as tidy. As it is, I do try to end my historical novels at a high point in my characters lives, so even if it's not a real HEA, at least it's satisfying.

Margaret -- I'm delighted to hear you're enjoying The French Mistress! Fortunately for readers looking for a book for the holiday weekend, Borders seems to have jumped the gun all over the country and put it out on the shelves early.

Kwana -- Yes, Louse does have a great story, doesn't she? Fun for me to write!

Polonaise said…
Louise's story is fascinating and would be excellent movie material. I look forward to reading the book!
July 4, 2009 at 1:14 PM

Clare said…
Wow, what a wonderful interview - really in-depth and fascinating. I will have to pick up one of Susan's books! Thanks a lot for sharing.
July 5, 2009 at 5:25 PM