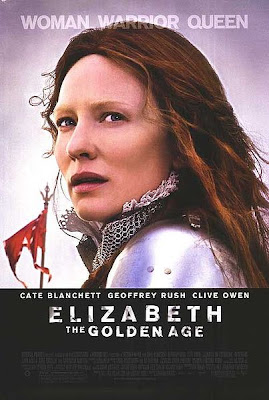 'When Queen Elizabeth's reign is threatened by ruthless familial betrayal and Spain's invading army, she and her shrewd advisor must act to safeguard the lives of her people. But when a dashing seafarer, Walter Raleigh captures her heart, she is forced to make her most tragic sacrifice for the good of her country. Elizabeth: The Golden Age tells the thrilling tale of one woman's crusade to control her love, destroy her enemies, nd secure her position as a beloved icon of the western world.'
Sounds intriguing doesn't it? Too bad this film doesn't live up to the back cover copy of the DVD. I saw this film when it first came out. I had seen the first movie and loved it despite the crap history, so I was excited to see how Cate Blanchett was going to tackle playing the older queen almost thirty years into her reign. The good news is that the costumes are stunning, the production values stupendous and Cate Blanchette's performance doesn't disappoint. However, the movie is a convoluted mess. I'm no expert on Tudor history but I know a fair amount and I spent most of this movie confused.
Let's start with cramming Mary, Queen of Scots and the Spanish Armada all in one film. Pick one or the other, but not both in a two hour movie. Half the time I didn't know who anyone was supposed to be until the credits. Tom Hollander? I had no idea he was supposed to be Sir Amyas Paulet. Rhys Ifans? He's in the movie, but I don't think he even has a single line and anyway, his character doesn't exist in history. Nor does Adam Godley's as Walsingham's brother William. And why were Bess Throckmorton's cousins killed? For being Catholic? It didn't make any sense. Even the Babington plot went over my head but it apparently went over the head of the screenwriters as well (Babington never attempted to shoot the Queen by the way).
I know that Cate Blanchett is an Academy Award winning actress but she looked too good as Elizabeth in this film. In fact she'd hardly aged since the last film. Where was the white lead make-up? Elizabeth is 52 at the start of the film (It is 1585) and 55 during the Armada, but she doesn't look older than 25. There are some lovely scenes however between Elizabeth and her maids of honor as they dress her which gives you a brief glimpse into what it was like to be Queen when you had virtually no privacy. But a little versmilitude on Elizabeth's decrepitude would have been appreciated. She looked glorious at all times which is how Elizabeth pictured herself in her mind and in her portraits but wasn't reality.
Clive Owen is wasted as Sir Walter Raleigh who isn't even that significant in Elizabeth's life compared to Robert Dudley, The Earl of Leicester (the part Clive Owen should have been playing) and his step-son the Earl of Essex. Bess and Raleigh didn't secretl marry until 3 years after the Armada. Still the love triangle between Bess, Elizabeth and Raleigh never quite jells.
Again, I understand that Geoffrey Rush is an Academy Award winning actor, but Elizabeth's chief advisor during these years was William Cecil, the future Lord Burghley. And poor Sir Francis Drake gets short shrift in this film as well. The film gives the impression that Raleigh not Drake was the architect of the strategy against the Armada.
The film also makes it appear that Spain wants revenge on England for the death of Mary, Queen of Scots. When in actuality it would have benefited France more than Spain (because of the auld alliance) if the Babington Plot had succeeded and Mary had been placed on the throne of England. Frankly I found the scenes set in Spain of Philip II muttering about Elizabeth 'the whore' kind of creepy, and the little Isabella (who was actually 21 at the time) clutching her little Queen Elizabeth doll. Elizabeth's speech to the troops at Tilbury omits possibly the most famous and oft-quoted phrase of the queen's: "I know I have the body of a weak and feeble woman, but I have the heart and stomach of a king, and a King of England too."
David Starkey's documentary of Elizabeth, the Glenda Jackson miniseries of the 1970's, as well as the Ann-Marie McDuff miniseries that was shown on PBS are all worth viewing if you want a good picture of Elizabeth's reign. But the best of the lot has to be the HBO/Channel 4 miniseries Elizabeth I starring Helen Mirren as Elizabeth, Jeremy Irons as Leicester and Hugh Dancy as Essex.
Elizabeth I

Amanda McCabe/Amanda Carmack/Laurel McKee said…
100% agree with you about this movie, Elizabeth!! I really liked the first movie--it was very tense and scary, and really seemed to capture the "feeling" of the period (even though the history was a hot mess). So I was excited to see this one, but quickly realized that there is a way to make even the Armada AND Mary Queen of Scots totally, totally dull.

Elizabeth Kerri Mahon said…
And Clive Owen! What really bugged me was that they had to take away from Sir Francis Drake and Dudley to beef up Raleigh, which again begs the question? Why even use him? And not deal with her love for Dudley? He was the great love of her life, and he dies several months after the Armada.
June 8, 2009 at 11:05 AM

Nancy Ewart said…
It always bugs me that Hollywood has to garbage up the facts of Elizabeth I's reign. The era - and the queen and her court - are fascinating. They don't need to be "made" interesting by messing with the history. They already are fascinating. I agree with you on Elizabeth: the golden age - awful movie but I disagree with you on the miniseries with Helen Mirren. I found that historically inaccurate that I could barely stand to watch it.
June 12, 2009 at 3:39 AM

Elizabeth Kerri Mahon said…
I found Helen Mirren's performance compelling and it was lovely to see Jeremy Irons playing Leicester. I didn't like Hugh Dancy as Essex, I found him a little too callow and untried for the part, plus he looks about 12. Still its an improvement on Elizabeth: The Golden Age.
June 12, 2009 at 4:47 PM