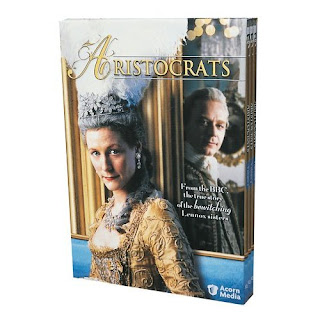 Ah, the BBC, nobody does it quite the way you do. For every piece of crap like the recent Merlin and the god-awful Robin Hood, they give us a sumptuous costume drama like Aristocrats. Aristocrats is a 1999 mini-series, based on the biography by Stella Tillyard about the fabulous Lennox sisters. The Lennox sisters aren't just any aristocrats, no they are the creme de la creme of aristocrats, the great-grand daughters of Charles II and his mistress Louise de Keroualle, Duchess of Portsmouth. Their story, spanning almost the whole of the 18th century, is one of one of the noblest families in England and the changes that they see in their life-time.

The sisters grow up in a world of immense privilege. From childhood, they are surrounded by servants, and family members. Both their parents were courtiers to George II, consequently the children grew up around the Royal Family, waiting for the time with they too will make their debut and take their place amongst the elite of the country. They are also brought up with the romantic story of how their parents arranged marriage turned into a love match. The 2nd Duke of Richmond was married to Lady Sarah Cadogan to pay off a gambling debt between their fathers. Soon after the wedding, the groom (only 18) took off on a grand tour of Europe, not to return for 3 years. When he returned, he attended the theater, and was immediately taken by a beauty sitting in one of the boxes, surrounded by admirers. Too his surprise, it turned out to be his own wife.

With this story swirling around in their brains, it was no wonder that each Lennox sister grew up to expect to have happy marriages, and to choose their own husbands, while their parents of course felt that since their own marriage was arranged, they knew best for their daughters. Caroline (played by Serena Gordon) is the first to rebel. Unmarried at twenty, and almost on the shelf, she becomes fascinated by Henry Fox (Alun Armstrong). An atheist, and a former libertine, twenty years her senior, he was no one's idea of a perfect match, certainly not Caroline's parents. Although he was a rising politician, he was impoverished. Still Caroline and Henry fell in love and eloped, leading her parents to refuse to see her.

The next sister Emily (Geraldine Somerville), the beauty of the family and the favorite daughter, is pursued by the Earl of Kildare (and future Duke of Leinster played by Ben Daniels), the leading arisocrat in Ireland. He's no more to her parents liking than Henry Fox. Their chief objection? He was Irish. However, Emily was used to getting what she wanted, and she soon managed to sway her parents to letting her marry the Earl of Kildare at the age of 15. The day after her marriage, with the consent of her husband, Emily hightails it over to her sister Caroline's house, for a reconciliation. It is only after Emily has her first child, that Caroline and her parents are reconciled, although they apparently never warm to her happy and successful marriage to Henry Fox (future Lord Holland). After bearing her first husband 19 children, Emily later scandalizes both the aristocracy and her sisters when she remarries after Leinster's death to her children's tutor, a younger Scotsman named William Ogilvie with whom she had been having an affair. Her youngest son, although acknowledged by Kildare was Ogilvy. She and Ogilvie had three children after their marriage.

Lady Sarah Lennox (Johdi May), the second youngest, has the longest road to happiness of all the sisters. She arrives back in England at the age of 14, after having spent most of her childhood in Ireland with her sisters Louisa and Cecilia after their parents' death. The future George III falls in love with her, and her family encourages the idea that a match might be made between the two. But after George becomes King, a more suitable match with the German princess Charlotte of Mecklinburg-Strelitz is arranged. Sarah feels embarrassed and humiliated at the rejection. She rushes into marriage with George Bunbury, who turns out to be indifferent and boring, stumbles into a love affair with Lord William Gordon by whom she has an illegitimate child. Ostracized by society after her husband divorces her, Sarah lives in a kind of purgatory with her brother until she finally finds happiness as the wife of a career soldier, George Napier.

The mini-series is six hours of glorious costumes and sweeping drama, narrated by Emily as played by Sian Phillips as an old woman. At the heart of the story is that of a family. The Lennox family suffers from petty quarrels, jealously, heartbreak, just like any other family, it's just they are extremely rich and privileged. The sisters fight over their parents will, and then later Emiy and Caroline are estranged for years over Lady Sarah's scandalous behavior. It also gives the viewer a good idea of what it was like for a woman of that time period, if she transgressed, and got caught. The performances are uniformly wonderful, although I found Jodhi May as the young Sarah Lennox a bit boring and bland, but I find her a particularly boring actress. I was also disappointed that George II was portrayed as a jolly Englishman, when he barely spoke English.

The final episode spends most of its time telling the story of Emily's son Lord Edward Fitzgerald, a passionate supporter of the United Irishmen, who sought to rid Ireland of the English. Unfortunately because the episode was only an hour, the story seemed truncated. A whole mini-series could be done just on Lord Edward Fitzgerald. The mini-series also never seems to address Lady Louisa's (played by Ann-Marie Duff and later Diana Quick) inability to have children, whether or not that caused her distress. She is the least interesting or knowable of the sisters. She seems to have spent her life trying to be good and doing good works, which is noble but doesn't make for interesting drama. Apparently after her husband's death, she discovered that he'd kept a mistress in another town for their entire marriage.

If you loved The Duchess, the recent movie about Georgiana, The Duchess of Devonshire, then you will really love this mini-series. It has all the depth that the movie, in my opinion lacked, precisely because the film-makers had six hours to detail their stories. There is also an amazing companion book to the series chock-full of photos and details about the sisters.
Caroline Emily Louisa and Sarah Lennox

Susan Higginbotham said…
I enjoyed this thoroughly when it first aired. Thanks for reviving my memory!
June 25, 2009 at 9:04 AM

Anonymous said…
Sounds like a slut to me. I work at a drug rehab
and there are a lot of sluts, excuse me(strong women) here. I say this sarcastically of course. This was/is very interesting and I enjoyed this reading. I love scandalous women.
July 14, 2009 at 3:17 PM