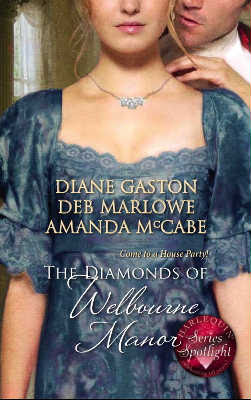 Amanda McCabe wrote her first romance at the age of sixteen, a vast epic starring all of her friends as the characters, written secretly during algebra class. She's never since used algebra but her books have been nominated for many awards, including RWA's prestigious RITA award, The Romantic Times Bookreviews Reviewer's Choice Award, the Bookseller's Best, The National Reader's Choice Award, and the Holt Medallion. She lives in Oklahoma with a menagerie of cats, a pug, and a bossy miniature poodle, and loves dance classes, collecting cheesy travel souvenirs, and watching the Food Network - even though she doesn't cook. Visit her at http://ammandamccabe.com and the riskyregencies.blogspot.com.

I’m so excited to be a guest here at one of my favorite blogs, Scandalous Women! When I was in first grade, I found a book about the adventures of various Greek goddesses, and I’ve been hooked on stories about strong, independent (and sometimes naughty!) women ever since. I’m very lucky to get to create my own scandalous women of history in writing fiction.

The three heroines of The Diamonds of Welbourne Manor are fictional, of course, but they are based on tales of eccentric, individualistic families in history. See, here’s the story: Diane Gaston, Deb Marlowe, and I have been friends for a long time (we even went on a Regency-theme tour of England a few years ago! Very appropriate…). We always have fun when we get together, so when our publisher Harlequin came to us at the RWA conference a couple years ago and asked if we would like to do a Regency anthology together, we were very excited. Even better, we got to choose out own plot. But what would we come up with???

Luckily, Diane and I had already planned to meet the next month and tour Williamsburg and Jamestown, and we persuaded Deb to join us. In between shopping and touring, we could brainstorm. We knew we wanted stories that were connected in some way, but open enough that we could have a variety of characters. (In the end, we had a strong, responsible hero, an artist heroine, and a wild-child in love with a Proper Hero, among many others!)

In the Barnes and Noble at Williamsburg, I found a book with the irresistible title Sex in Elizabethan England. Of course I had to buy it! In the end, the book itself was not as alluring as the title, but there was a chapter about one of my very favorite Scandalous Women in history (and one Elizabeth just featured here on the blog!), Penelope Rich. One of the great beauties of the day, she also had charm, intelligence, grace, ambition—and one of the wildest families around (and that is saying a lot in Elizabethan England!). Her mother, Lettice Knollys, was another famous beauty, the Queen’s cousin, married three times (once to the Earl of Leicester, stolen right from under the Queen’s nose!). Her brother was the Earl of Essex—‘nuff said. Her sister Dorothy had a scandalous marriage, and Penelope herself was divorced from Lord Rich and married (illegally) her longtime lover and father of four of her children, Charles Blount.

A thought sparked—the Georgian and Regency eras were also full of such scandalous families! What if we created one of our own? Thus were born the Fitzmannings, a miscellaneous collection of “hers, his, and theirs” resulting from the elopement of a duke and a married countess. One of the prime inspirations for them was the famous Georgiana, Duchess of Devonshire, her husband, her BFF (and hubby’s mistress) Bess Foster, her sister Harriet, Countess of Bessborough, and all their various lovers and offspring. (Caroline Lamb, Harriet’s daughter, called their collection “the children of the mist”). I adore Georgiana and Harriet and their wild life stories! As well as scandal, they had enormous affection for each other and their children, and we wanted that for the Fitzmannings as well. (Though I have to admit the Fitzmannings are not quite as wild as the Devonshire House Set or the EsseEssex bunch—they’re lucky enough to find their true loves and marry them). But people who follow their own hearts, who live their lives with passion and conviction, are fabulous no matter what the era…

I hope you enjoy the Scandalous Fitzmannings

Janet Gleeson: Privilege and Scandal (a new bio of Harriet)

Helen Pilz said…
Three cheers and huzzahs for scandalous women. Elizabeth, thanks for interviewing Amanda. She's an awesome writer (and has really cool pets!)
May 10, 2009 at 3:56 PM

Amanda McCabe/Amanda Carmack/Laurel McKee said…
Ah, Helen, my pets say thanks so much! :) (my Pug inspired two of the characters in "Charlotte and the Wicked Lord," and now the others are jealous...)
May 10, 2009 at 11:04 PM

Nicola Cornick said…
Hi Amanda (waving!)I was fascinated to read about the research and inspiration behind your anthology. I have to admit that I couldn't wait to read this book and so downloaded it as soon as I could. It was a wonderful read! Thank you!
May 11, 2009 at 4:41 AM

No, of course I'm kidding. But I'm very happy to have one chance of winning it.

Unknown said…
Great interview and thanks for sharing insights into your research. I was particularly intrigued by your list of favorite sources as a few of my personal top picks are on there too!

Diane Gaston said…
I'm soooo late to the party, but wanted to stop by and say hi! Writing this anthology was the BEST writing experience ever!
May 11, 2009 at 11:54 PM

Sarah, I always love sharing research books I've enjoyed (and hearing about new ones!). I forgot to mention Paul Douglass's bio of Lady Caroline Lamb (he also edited a collection of her letters called "The Whole Disgraceful Truth"--totally fascinating stuff!)
May 12, 2009 at 11:50 AM

We have just added your latest post "Scandalous Women: Scandalous Women welcomes Amanda McCabe" to our Directory of Foreclosure . You can check the inclusion of the post here . We are delighted to invite you to submit all your future posts to the directory and get a huge base of visitors to your website.