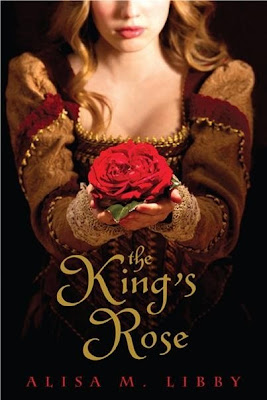 I came across Catherine’s story when I was nearly done with my first book, The Blood Confession – a historical fantasy inspired by the legend of Countess Bathory, who believed that bathing in the blood of virgins would preserve her youth and beauty for eternity. I had been working on this book for a while and I was feeling a little lost at the thought of being finished. I started casting around for some other wayward girl in history that I could write about, and that’s when I found Catherine Howard.

Catherine was a teenager when she first arrived at court, to be a part of the new queen’s household. While Henry was disappointed with his new bride, Anne of Cleves, he “cast a fantasy” to Catherine from the moment he saw her. She was young, pretty, petite, and vivacious—just Henry’s type. Less than a year after her arrival at court she was married to the King of England and awaiting her own coronation as queen. After over a year of marriage, she was accused of having an affair while married to the king. This was the same charge given to Henry’s second bride years earlier, which lead to her execution. That queen, Anne Boleyn, was Catherine’s own cousin.

Even though Catherine’s story is completely different from Countess Bathory’s, I had a similar reaction to it: “What was she thinking? Why did she do it?” These questions made me want to write about Catherine in her point of view, to come up with an internal logic to explain her illogical actions.

I found it fascinating to research Catherine and observe the different approaches to her story: she was simple-minded, greedy, whorish, and immature. Somehow I had to create empathy for her, to connect with her and find her voice. I didn’t want to make her too much a victim, especially since her bad choices are what drew me to tell her story in the first place. Certainly she was greedy, and not at all well-versed in court etiquette and politics, but at the core of her story I found her to be woefully, fatally naïve. And that, as I see it, lead to her downfall. The Tudor court was a fascinating but brutal place to live, filled with people each with his own agenda, and families willing to sacrifice their own young for a chance at power.

When my husband and I went to England, we visited the Tower of London on February 13, the anniversary of Catherine’s execution. She is buried in the chapel beside her infamous cousin, Anne Boleyn. A bouquet of roses was draped over Anne’s crest that day, and the guard showed us how the white stone is now discolored because of all the flowers she has received over the years. It made us feel sorry for Catherine that she never gets such attention. While she did not have nearly the impact on history that Anne did, her story is still a fascinating one. I left a small stone on her crest as a mark of our visit, and I can only hope that she knows that we came a long way specifically to visit her.

Please head on over to Alisa's web-site: www.alisalibby.com more information on both her wonderful books. Also any one who leaves a comment will be eligible to win a copy of Alisa's book.
Alisa M. Libby Catherine Howard

lisekimhorton said…
Whether or not you achieved your goal in The King's Rose, you certainly did in just this short blog post, Alisa. It would seem that Catherine was just one of the many people who's goals and behavior were suspect, and obviously not one capable of handling herself in such "august" company! Certainly left me feeling a twinge of sorrow for a shallow young girl forgotten by history except as a notorious notch in Henry's royal belt!
April 24, 2009 at 3:16 PM

Eliza Knight said…
As soon as I saw the words Catherine Howard I was hooked! I'm obsessed with the Tudors. Both your books sound fascinating!

I've never heard of the Countess , I'll have to read that book too!

I plan on visiting London in the next few years, and the Tower is one of the spots I definitely want to visit. How did you feel while there? I've heard a lot of people feel overwhelmed, and get the sense of sadness and despair, just curious :)

AvonLadyJerrica said…
What a fascinating story The King's Rose must be, Alisa! I cannot wait to read it, along with The Blood Confession. Based on your descriptions here, they are definitely "must reads"!

And how amazing that you got to visit Catherine's grave on the anniversary of her execution! That must have been an amazing experience!

Ginger Calem said…
Oooh, you have piqued my interest. This sounds so interesting. I have always love to read about the Tudors. Just the way you talk about Catherine makes me feel that you did her justice in your book.

I look forward to reading it.

Anonymous said…
I love the Tudor Dynasty. By far my favorite. Poor Catherine. The Howards shamelessly exploited their daughters but Catherine was too young and not nearly clever enough for the role she was cast. She was child.
April 24, 2009 at 5:04 PM

Mike said…
I don't know if you'll be interested in hearing about this, but...it may sound odd, since I'm a man, but I'm reading Jane Fonda's 'My Life So Far' right now and I've got to say it's quite interesting! Guess I just wanted to tell someone about it, since I'm so surprised that I'm not only reading it, but enjoying it.

Amanda said…
Oh that is really sad about her gravesite not getting as much attention. This is the first time I've heard about Blood Confessions and I checked it out on the website. What an interesting tale. How gory! Thanks for the guest post!
April 27, 2009 at 12:43 PM

Anonymous said…
I'm sure to love this book. Katharine Howard has always been my second-favorite wife of Henry VIII. Can I also just say I LOVE your novel The Blood Confession? So this one will probably be good too...
April 28, 2009 at 12:33 PM

Vixen Valentino said…
Few people realize how much research needs to be done before writing, thanks for letting us have a glimpse into the process. I think it somehow makes a book more 'real' when you know what was put into it.