Scandalous Book of the Month: Mistress of the Sun 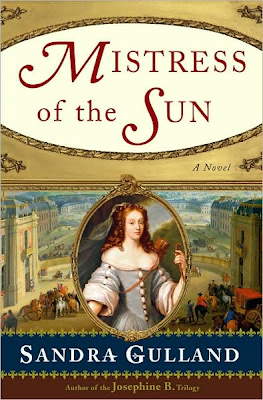 I'm very pleased to be featuring Sandra Gulland's latest novel Mistress of the Sun, as the book on the month here on Scandalous Women. Sandra is well known for her trilogy about the Empress Josephine, but Mistress of the Sun tells the story of Louis XIV's first official mistress, Louise de la Valliere.
I've always been fascinated by Louis XIV ever since I read the Angelique series as a teenager. There's something about the Sun King and life at Versailles that is just so delicious. Sandra Gulland's book did not disappoint me. If you love historical fiction, then you must pick up a copy of this book.

The book opens when Louise, called Petite, is four years old, and precocious beyond her years, already reading, and obsessed with animals. She sees a wild white horse that she names Diablo, that she convinces her fahter to buy. Petite wants to tame him but she uses measures that are forbidden by the Church. Although Diablo is successfully tamed, bad things happen, she falls from the horse while in the woods, threatened by a boar and breaks her leg, which leads to a limp, and then later on her father dies, leaving the family with no money. Petite's mother sticks her in a convent while she goes off to find a new husband. Petite is happy at the convent, and wishes the religious life but fate and circumstances have other ideas. Her mother's new husband, a marquis, secures her a post to the daughter of Gaston, the Duc D'Orleans, brother of Louis XIII and uncle of the new king. Although Louise is beautiful and shy, she has a limp and no dowery, which makes her prospects of marriage dismal.
When Princess Marguerite is sent off to marry Cosimo Medici, the Duke of Tuscany instead of her cousin Louis XIV as planned, Louise finds herself in the household of Princess Henriette, called Madame, the wife of the King's brother Philippe. Henriette and the King share a close friendship, and rumors abound that they are lovers. Henriette encourages the King to flirt with Louise, which ultimately ends up with the two involved in a passionate love affair.
Louise is shocked that the King would fall in love with her, when there are so many other women at court who are more high-born than she is, including her good friend Athenais. Although one of Louise's ancestors fought along side Jeanne D'Arc, the de la Valliere's family can't trace their ancestry back to Charlemagne which makes them minor nobility. But Louise is an excellent horsewoman and huntress, two interests that she and Louis have in common. Louise struggles with her decision to become the King's mistress, committing adultery is a sin, but she is convinced that she is doing a service to the monarchy. Still the relationship is kept secret initially and Louise's children sent out to be fostered by others. She must also suffer the disapproval of her family until Louis officially recognizes her as his mistress.
Louise must cope with loss of many kinds throughout the book, along with her many illnesses. She also learns a harsh lesson, one that many royal mistresses have learned throughout the centuries, that the love of a King can be inconstant. Yet her saving grace is always her goodness, along with her yearning for spiritual peace.
This is a fascinating look at life in 17th century France, and Sandra Gulland doesn't spare the reader details of the less savory side of life back then, along with the richness and magnificence of palace life. Reading the descriptions of the often barbaric medical treatments, the filthiness of the palaces, as well as the superstitions that ruled at the time, it made me glad to live in the 21st century. Although I would happily time travel again. This was the first book that I have read by Gulland and it won't be the last. I found it hard to put Mistress of the Sun down, although I knew how the story ended. Here's hoping that Gulland gives us more books from this period. I would love to read her take on Louis XIV's relationship with Madame de Maintenon, his morganatic wife.
Louis XIV Louise de la Valliere Mistress of the Sun Sandra Gulland

Lise said…
Mistress of the Sun sounds like a terrific historical novel and your review covers the breadth of the topic nicely, while making me intrigued enough to want to read the book. I had not heard of Gulland and Googled her to see what else she had written. Had you read her Joseph B. trilogy? It, too, sounds like terrific coverage of the panoramic events of the woman and the world of the time.
April 14, 2009 at 3:12 PM

Anonymous said…
Thanks for a fabulous review! I am anxious to read Mistress of the Sun and your commentary just reinforced my desire to dive into it sooner rather than later. :)
April 14, 2009 at 6:34 PM

Elizabeth Kerri Mahon said…
Lise, I have not read the Josephine trilogy yet. Now that I've read Mistress of the Sun, I can't wait to dive into the Josephine B. books.

Under the covers, thanks for the compliment! Mistress of the Sun is so wonderful that you will wish the book didn't end.
April 15, 2009 at 11:48 AM

Pam Walter said…
This sounds like a very interesting book for me to recommend to my book club. The only reservation I have about historical fiction is how to know where the fact ends and the fiction begins. Any tips for this? www.satisfiedsole.com
April 16, 2009 at 9:19 AM

That's an important question, and one that often comes up!

I've put an Author's Note at the back of Mistress of the Sun which addresses the major issues. I also recommended a good book of non-fiction for readers should they care to follow-up.

Regarding the parts of the history that are known, I prefer to stick to the facts (unless noted otherwise). However, it's important to remember that a historical novel is a distillation of a life. Were it the entire life, it couldn't work as a novel.

Elizabeth Kerri Mahon said…
Pam, there are a lot of really good historical fiction authors besides Sandra that you might want to try for your group. Phillipa Gregory, Susan Holloway Scott, Amanda Elyot, and C.W. Gortner are just a few, and most of them have biographical notes in their books to let the reader know what is historical and what might have been fictional in their books.
April 18, 2009 at 10:27 AM