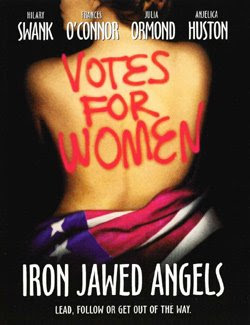 
In February 2004, Iron-Jawed Angels premiered on HBO. It is the story of Alice Paul (1885-1977) and her friend Lucy Burns, and the last 8 years of the women's suffrage movement in the United States. The film opens with Alice and Lucy arriving at a meeting with Carrie Chapman Catt and the Reverand Anna Howard Shaw, two stalwart's of the women's right's movement. Both Paul and Burns had been actively involved in the suffrage movement while studying in England. As the duo becomes more active within the National American Woman Suffrage Association (NAWSA), they begin to realize that their ideas were much too radical for the established activists, particularly Carrie Chapman Catt who openly disdains their methods. While both Paul and Burns lobbied for the a constitutional amendment, Catt and the NAWSA had focused more on suffrage on a state by state basis. By 1912, 9 states had given women the right to vote, mainly in the west. Both Paul and Burns eventually leave NAWSA and create the National Woman's Party (NWP), a much more radical organization dedicated to the fight for women's rights. Both women had been inspired by women like Emmeline Pankhurst and her daughters in England.

Over time, tension between the NWP and NAWSA grows as NAWSA leaders criticize NWP tactics such as direct protesting of a wartime President and picketing directly outside the White House. Relations between the American government and the NWP protesters also intensify, as hundreds of women are arrested for their actions, though the official charge is "obstructing traffic." 230 of them are sent to prison for 60-day terms where they suffer poor conditions. Paul demands that they be treated like political prisoners. During this time, Paul starts a hunger strike and is joined by the other women and during which prison authorities force feed them through a tube. News of their treatment leaks to the media and they are dubbed 'Iron Jawed Angels.' Pressure is put on President Wilson as Carrie Chapman Catt and the NAWSA seize the opportunity to lobby tirelessly for an amendment to the Constitution. The film ends with the news that the 19th amendment has been rafitied in August of 1920. An end note to the film lets the viewer know that Paul, Burns and all of the other women eventually being pardoned by President Wilson.

This film should be required viewing in every high school across the country to remind not just young women but also men of the struggles that women went through to get the vote and that it is a right that should not be neglected and taken for granted. Hilary Swank drives the film as Alice Paul. Raised a Quaker in Moorestown, NJ, from childhood Alice had been taught that men and women were equal. She worked relentlessly to get women the right to vote, even giving up any semblance of a personal life.

The film captures the fractured relations between the old guard of the women's right's movement, women who had come up through the ranks when Susan B. Anthony and Elizabeth Cady Stanton were the leaders, and the younger generation who had less patience than the older generation. This wasn't the first time that the suffrage movement in this country had split, there was an earlier split just after the Civil War between the Bostonians such Lucretia Mott, and Anthony and Stanton. Nor does the film neglect the contributions that immigrants and African-American women made to the struggle. Because the film is only two hours long, some of the important women in the movement get short shrift such Inez Mulholland. The film also gets bogged down when it tries to introduce something of a love interest for Alice Paul in the character of Ben Weissman, a fictional cartoonist for the Washington Post. Even the writers don't seem particularly interested in this story-line because he disappears for huge chunks of time and never seems bothered that Alice doesn't seem as interested in him. The other weak link is the fictional wife of a U.S. Senator who one supposes is meant to symbolize the well-to-do woman who realizes that she has just as much at stake as other women in the movement.

Katia von Garnier uses contemporary music like Sarah McLachlan on the soundtrack which is a bit jarring at first. The other disappointment is that the DVD has no real extras apart from the director's commentary. There is no behind the scenes look at the filming or any more information about the women portrayed in the film. There are also some minor historical inaccuracies. Woodrow Wilson did not ride to his inauguration in a car, William Howard Taft was the first president to do that, and there are some inconsistencies in the hairstyles and costumes such a woman wearing a wristwatch before they were invented.

Alice Paul continued the fight for equality even after the 19th amendment was ratified. She was the architect behind the Equal Rights Amendment which she fought for until it was finally defeated in the 1970's. Having obtained a Phd, Alice went on to also obtain a law degree in 1922. For forty years she lived in Washington, DC in a house that was donated to the movement by Alva Belmont called the Sewell-Belmont House. The house is now open to the public as a museum. Alice was also rewarded with a postage stamp in her honor by both Britain and the United States.

Paul is as important in the history of the women's righ's movement as Susan B. Anthony and Elizabeth Cady Stanton and deserves to be more well known (I had never heard of her before seeing this movie.)

Someone was kind enough to give me my first blog award today for one of my blogs, and I have to pass it on to ten people who have a great attitude and a great blog... so, for having such an interesting and informative blog that's always a pleasure to read, I'm passing it on to you:

Anonymous said…
Enthusiasts of the films of Polish director Krzysztof Kieslowski (Blind Chance, Dekalog, The Double Life of Véronique, Three Colours Trilogy, etc) are invited to drop by my chatroom at the Brasserie Alizé on the anniversary of the director’s death, this coming Friday evening, 13 March 2009, from around 1800 GMT. Please pass on the invitation to others and hopefully see you there!
March 12, 2009 at 4:16 PM