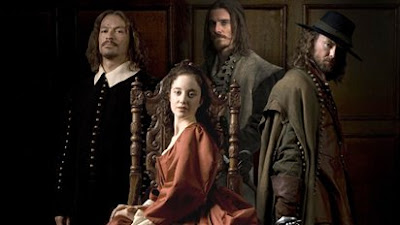 dave hambidge said…
Hello mrs boss lady. Thankyou for having the courage to tackle what is a very important subject for fiction writes of any era and style. Namely how far can one mould the accepted known historical facts before creating historical friction.

I totally support your comment, "But having fictional characters marry real life historical characters is going to far."

If the author wishes or needs or has to 'sexup' a tale to get publicity or a contract for their work, non-conjugal frolicking by minor characters is more honest. And less likely to lead the reader to the wrong conclusion about a known figure.

The great strength of such "mini-series" is that the bring the past to life is in a very memorable way that written words probably never will. Well crafted and filmed accounts stick with the viewer, so the author has a great responsibility to preserve the facts they are inculcating into their audience.

If they break with that faith and overbend matters the author is guilty of dishonesty, IMHO.

TammiMagee said…
I live in England but have to admit that I missed this miniseries-but I would actually quite like to see it. I wondered if you could take a look at my first post about Georgiana duchess of devonshire and let me know what you think? I'm always worried that my posts are dull. :)
April 6, 2009 at 4:54 AM

Elizabeth Kerri Mahon said…
I'd be happy to Tammi. I loved your posts on Jennie Jerome.

Elizabeth Kerri Mahon said…
Thanks, Dave. My point exactly. I love historical miniseries precisely because if they are well done, they provoke thought and might actually get someone to pick up a book to read more. I object when they change facts and people to sex things up which is why The Tudors gives me agita.
April 6, 2009 at 12:32 PM

Shovelhead said…
I realize this old but the series is new to me. I am always interested in the history of England as it applies the various times it committed atrocties against my religion and my ancestors. Both Irish and Catholic.

I dont think she was an instrument of sex but an instrument that is a constant in film, literature plays she was the woman that gets the man to tell his story. Men dont tell each their deep secrets but we tell them to women.

That is her part in the story. I always find it interesting how people prattle on about historical inaccuracies but will overlook the accuracy of how English for centuries has butchered their way around the globe. It is true the victory writes the history. Nazis were evil, japanese indeed evil but England has done its share of absolute butchery.

I enjoyed how she alone pointed out some of the savagery. That alone makes her a great character

Anonymous said…
A useful comment, thanks ELIZABETH KERRI MAHON. The series is now available on Netflix. I enjoyed it and agree with much of what you have said especially about this being "a neglected period in English history"
October 8, 2012 at 9:20 PM

Unknown said…
I just watched the American DVD release of this series ridiculously title "The Devil's Mistress". We can't put "Whore" in the title here...lol. I was none too happy to find this "true account" was NOT true...lol. I found your blog when I googled historical inaccuracies regarding the series. I agree whole-heartedly that it goes way too far to have a fictional character so HEAVILY entwined with real people. Now, if there is a mysterious person that appears mentioned in history, its fun to romanticize or fictionalize that person and how the relationships "might" have been. But to completely create someone and put them in direct connection. Frustrating!!!
July 31, 2013 at 6:14 PM

Heather said…
This miniseries was aired again recently, which I recorded and started watching tonight. Thank you for letting me know Angelica Fanshawe is not a real person. And I absolutely agree that the male characters are far more compelling. As I was watching I turned to my daughter and said, "Don't get me wrong, I like this. But I didn't think it was going to be about war so much." Still, I am learning a little about England's civil wars which I haven't had a chance to study before.
August 22, 2013 at 1:11 AM

Daniel Hewitt said…
I think some of you may be missing the point a little here by focusing too much on what is and isn't historically accurate. The series re-creates or interprets the texture of the period, in a similar way that a painting may help to illuminate certain truths, moods or feelings by accenuating or altering representational reality, sometimes not entitely consciously on the part of the creator. If we can take it as given that this series is a piece of art, or at least an art-form and a creative work, then we allow ourselves the freedom to accept that the interpretation of, for example, superstition and religion in the series, may be just as important in illuminating this period of history in terms of the way people of the time thought and felt, and therefore may help contribute to a broader understanding of our culture and collective history as a whole, just as much as historical fact, which is well served by text books.
April 1, 2014 at 11:02 PM

Pentopaper said…
Shovelhead you are an uneducated idiot. To compare 1600's England to Nazi's of 60 years ago is the most ridiculous thing I have ever heard.

Don't get me wrong I am also RC however, the atrocities my own religion has committed in the past makes my stomach turn. All cultures especially those as old as the English (we were also constantly pillaged throughout history) have quite often a violent past. Next you will be telling me Brave Heart was about an innocent orphan.

Point of interest the Irish have also had a somewhat shady and very recent past.
April 8, 2014 at 6:06 PM