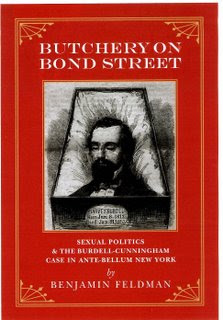 On the morning of January 31st, 1857, dentist Harvey Burdell was found brutally murdered in his surgery at his home at 31 Bond Street in New York City. The prime suspect was Emma Cunningham, a 39 year old widow with five children who had been serving as the landlady of the boarding house that Burdell ran out of his home.

This is the basis for Benjamin Feldman's excellent book Butchery on Bond Street: Sexual Politics & The Burdell-Cunningham Case in Ante-Bellum New York. The case filled the newspapers throughout the inquest and the murder trial of Emma Cunningham for the murder of her lover. She was eventually acquitted but the case brought to light the unsavory underbelly of middle-class life in New York.

Emma Cunningham had been born Emma Hempstead in Brooklyn, New York on August 15, 1818. Her father had a small business as a rope-maker for the shipyards. Emma was the oldest of three daughters, and she had ambitions far behind the little neighborhood in which she lived. Her parents were devout Methodists which meant that anything that smacked of worldiness was discouraged including the making of money for profit, dancing, drinking, and vanity. Emma could see the lights of Manhattan from the waterfront and she longed to be either a part of Manhattan society or even Brooklyn for that matter. At the age of 19, she married George Cunningham, the son of a local brewer, who was 21 years her senior. The Cunningham family were upper middle class and Presbyterian. When Emma married George not only had she moved up in the world, but her relationship with her family was severed.

For a brief time things were good in the Cunningham household. They were even able to move into Manhattan in the fashionable Union Square area for several years. But George Cunningham soon suffered a series of financial reversals that slid the Cunningham family back down the economic ladder. Soon they were back in Brooklyn, but not in the fashionable area of the Heights. Emma gave birth to three daughters, but George was determined to have a son, despite the fact that he could barely support the three children that they already had. Soon two sons were added to the family. George, like many others, left for California to see his fortune, but he was back after a year. He died in 1853 leaving Emma $10,000, which wasn't enough after death duties, to support herself and her children. Finding a job that pay her enough to feed herself and 5 children was an impossibility. With no help from her family, Emma realized that her only hope of supporting herself and her children was to marry again. She had decided to move back into Manhattan, realizing that she would not be able to find a husband living in Brooklyn.

She spend two fruitless years in Manhattan before she met Burdell. While she met many single men, finding one willing to take on 5 children was another story. It is unclear when or how Emma made the acquaintance of Harvey Burdell. Soon they were keeping company, and Emma accompanied Burdell to Saratoga for the summer season. By the end of the summer, Emma was pregnant, and their relationship began to fall apart. Instead of marrying her, Burdell forced Emma to have an abortion. He allowed her to move into his home to run the boarding house but he refused to marry her. To add insult to injury, he began conducting an affair with a younger cousin who had just gotten a divorce. Emma also suspected that the prostitutes who gave for dental appointments were not just getting their teeth checked out.

Emma had once again made another poor choice in a man. Burdell turned out to be nothing more than a sociopath, and a swindler. Somehow, he had gotten the idea that Emma had money, that she was a wealthy widow just looking for a little fun, not looking for a baby daddy. The relationship quickly turned sour and bitter on both sides. The final straw apparently occurred when Burdell decided to sell his house, and evict Emma.

Butchery on Bond Street is more than just a true-crime book. It is a social history of ante-bellum New York, as the city became the leading economic and social center that dominated the country for more than a century. It also details the rise of the press and scandal sheets as they fought to tell the story of what happened that fateful night. The press attention to this crime rivals that given to the OJ Simpson trial over a hundred years later. Newsboys would fight to be the ones to get to sell the papers. And it wasn't just the press, the appetite for the sensationalistic aspects of the trial was heavy. Quickie novellas about the case appeared seemingly overnight.

It's hard not to feel sympathy for Emma Cunningham. One is constantly reminded in the book of just how few choices women had in the 19th century. One Emma threw her lot in with Harvey Burdell, she'd basically made herself ineligible for marriage to anyone else in that social class. Too many people had seen them together in Saratoga. She'd moved into his home under the guise of running the boarding house. She became increasingly desperate as she could see Burdell slipping away. It doesn't excuse her behavior if indeed she was the one to murder Burdell.

Emma was acquitted of the murder, but she then tried to stake a claim to Burdell's estate by insisting that not only were they married but that she was carrying his child. She was so desperate that she tried to buy a baby to pass of as her own (shades of daytime drama!). She was brought up on charges for fraud but was acquitted of those two. She then fades into obscurity over the next thirty, surfacing occasionally. She finally passed away in February of 1887. She is buried in Green-wood Cemetary in Brooklyn as is Harvey Burdell.

Feldman does a good job of recreating the world that Emma and Burdell occupied. If I have one quibble it is that he tends to jump from one subject to another and it can get a bit confusing at times. Still he provides a fascinating glimpse into a lost world and a tantalizing bit of New York history.

Elizabeth Kerri Mahon said…
I think because there were no witnesses, and there was not enough evidence to convict. In the 19th century, juries were more apt not to believe that women were capable of murder than today.
February 6, 2009 at 2:42 PM

dave hambidge said…
Or were they publicly sanctioning the 'revealed bad behaviour' of one of their men?

Bill Peschel said…
If you're still interested in more about the case, hunt up a used copy of "Forgotten News" by Jack Finney. Half the book is devoted to his retelling of the case, complete with contemporary illustrations. It's one of my favorite books. You may remember Jack as the author of "Invasion of the Body Snatchers" and the time travel novel "Time and Again."
February 7, 2009 at 11:37 AM

Elizabeth Kerri Mahon said…
Thanks Bill for the book recommendation. I had no idea. I read Time and Again a long time ago, and some of his other short stories. I actually first heard about the case, not through Benjamin Feldman's book, but through Publisher's Marketplace. Apparently someone else is writing about it.
February 8, 2009 at 10:16 AM

Heather Carroll said…
Not that I'm condoning murder but I still like hearing about historical women getting away with it, especially if the man was a jerk!
February 8, 2009 at 1:09 PM

Elizabeth Kerri Mahon said…
Certainly Harvey Burdell was a jackass, he treated Emma badly but she gave as good as she got from him. I don't agree with murder either but Emma must have been desperate. This was the second time in her life that she was facing poverty. It just goes to show you how carefully women had to choose husbands, they couldn't just rely on love.

hmmlife, since the punishment for murder was generally hanging, I think a lot of juries were reluctant to convict a woman, particularly a middle class woman for murder.
February 9, 2009 at 10:39 AM