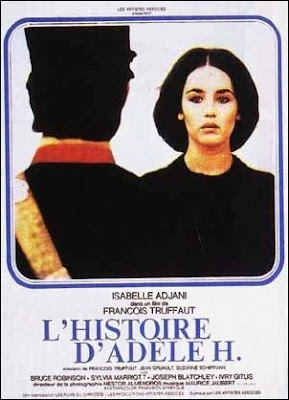 The Story of Adele H. is a 1975 film in English and French directed by legendary filmaker Francois Truffaut which tells the story of the real-life Adele Hugo, the youngest daughter of writer Victor Hugo, whose obsessive unrequited love for a naval officer led to her downfall. The film is based on her diaries. It stars Isabelle Adjani as Adele, Bruce Robinson (now a noted novelist and screenwriter) as Pinson.

The film opens with the arrival of Adèle Hugo, under an assumed name, in Halifax, Nova Scotia. Adele is devastated by the accidental death of her elder sister Leopoldine Hugo who drowned with her husband at the age of 19. Adele's fiancee was also killed at the same time. Her father has been living in exile on the island of Guernsey in the Channel Islands, after the rise of power of Napoleon III, who he opposed. Adele has been seized by an obsessive love for a British officer, Lieutenant Pinson. Pinson is not happy to see her and rejects her out of hand. Even when Adele shows him proof that her family approves of their marriage, he rejects her. Adele's parents try to force his hand by announcing in the papers that they are to be married but Pinson still won't marry her. Adele, now fairly unhinged, follows Pinson to Barbados and gradually degenerates as she realizes her love is unrequited. She descends into despair and madness. She dies in Paris in 1915, in her 85th year, in the asylum to which her father had committed her.

This film has haunted me ever since I first saw it when I was about ten years old. We had just gotten cable (HBO) and the story of Adele H. was playing. I watched it numerous times, telling myself that I was working on my French language skills. At the time, I was barely aware of who Victor Hugo was. The film follows the true story of Adele fairly closely. However, Adele was in her thirties when she made the decision to follow Pinson to Nova Scotia, not in her early twenties as Adjani is in the film. And she certainly was not as beautiful as Isabelle Adjani. Adele and her father were never very close. His favorite child was Leopoldine. In fact, Hugo wasn't even sure that Adele was his child. Her mother, Adele, had fallen for a minor poet named Saint-Breuve and Hugo always suspected that perhaps Adele was his.

Adele from childhood was apparently a sullen and moody child. Mental illness apparently ran in the Hugo family and doctors now believe that Adele suffered from schizophrenia. She had met Pinson when she was around 25 in Guernsey. Even then, Pinson had shown signs that he was feckless and untrustworthy, courting her only because she was daughter of the great Victor Hugo. Five years passed before Adele made her daring decision to leave Guernsey to follow him. In the meantime, she had turned down several suitors who had wanted to marry her. It was remarkable for anyone woman at that time to travel alone, so for Adele to flee without telling her parents where she was going took great courage.

Isabelle Adjani's performance is the wonder of the film. It's clear from the beginning that something is wrong as she tells different stories to different people about her relationship to Pinson. Her descent into madness is so wonderfully drawn, her scenes with Pinson where she tries to persuade him to love her, will break your heart. Adjani was nominated for an Academy Award for this performance, the first of her three nominations, all for portraying real life women (her other nominations were for La Reine Margot and Camille Claudel). Although you never see Victor Hugo in the film, his presence hovers over it. Particularly the scene where she is given a copy of Les Miserables from a stationer. It's not just her love for Pinson that is driving her mad, it is also her father, trying to make her way out of his shadow.

Sadly Adele outlived her entire family, dying at the age of 85 in 1915 during the first World War.

I highly recommend this film, but don't watch it if you've just broken up with someone, or you're in lust with someone who doesn't know you exist.
The Story of Adele H.

Bearded Lady said…
you find the most interesting movies. Never even heard of this one. I will have to check it out.
December 10, 2008 at 12:19 PM

Elizabeth Kerri Mahon said…
It's a wonderful movie, one of Truffaut's best films. But incredibly sad.
December 11, 2008 at 10:52 AM

Christina said…
Wow!! This is a film I really want to see and had never heard of! Around the time it was made, I went as a child to Victor Hugo's house on the Channel Island of Guernsey and was intrigued by the tour guide's description of a chair that no one was allowed to sit it because it was the 'ghost's chair' - the chair V.H. reserved for his daughte, Leopoldine, who, he believed, joined him for dinner each evening. What an impact that must have made on the rest of the family and their psychology! The story of her younger sister must be wonderful - thank you for bringing this film to notice!!
December 11, 2008 at 6:04 PM

Elizabeth Kerri Mahon said…
I"m glad that I could bring this film to everyone's attention. It had a huge impact on me as a child. I remember watching it repeatedly on cable. I think that most people know Truffaut from Close Encounters of the Third Kind but he was a masterful filmmaker.

Christina, I didn't know that story about Victor Hugo, but I had heard that he was haunted by her death for the rest of her life as was Adele. Some of the most powerful scenes in the film are of her talking to her sister.
December 13, 2008 at 10:35 AM

Christina said…
I want to see this film so much! Victor Hugo's writing is so beautiful and yet, as a man, he seemed to be so proud in an unpleasant way (even wanting Paris to be renamed Hugoville?? - Well, that would really work with Noel Coward's "The Last Time I Saw Hugoville..." :-). I think not!
Oh, I have to find this film...
December 13, 2008 at 7:26 PM