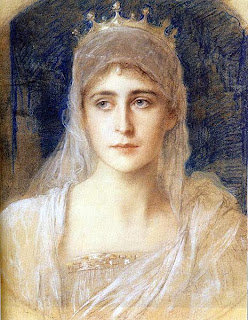 
It might seem strange to include a granddaughter of Queen Victoria and saint of the Orthodox Church in a site about scandalous women, but from the moment Grand Duchess Elizabeth (Ella) stepped into the glittering world of the Romanov Court at the age of nineteen, her life was constantly dogged by gossip and scandal.

Despite the disapproval of her grandmother, Queen Victoria, and having rejected the proposals of several suitors - including her cousin, Willy, the future Kaiser Wilhelm II -'the most beautiful princess in Europe' chose to marry Grand Duke Serge Alexandrovich, younger brother of Tsar Alexander III. Immediately, she became the focus of gossip and, within six months of her marriage, German newspapers reported she was about to be divorced. Her husband, it was said, was a homosexual, a pervert and a masochist, who treated her cruelly. She, it was said, took refuge in the arms of Serge's younger brother, Pavel. The truth was very different and yet, to this day, the gossip continues and the fact that the couple remained childless, has led to all kinds of speculation about the intimate details of their marriage, which probably remained unconsummated.

In my novel Most Beautiful Princess, I have endeavoured to portray a fuller picture of the true nature of their relationship.Ella loved her husband deeply. Serge was a highly-strung and sensitive man, terrified of expressing his feelings for fear of appearing weak. He loved art, was fluent in several languages, was deeply devoted to his Orthodox faith, had studied theology to the extent that he had impressed the Pope, and had a refinement that was uncommon in the Russian Court. At the time that Ella accepted his proposal, he was distraught about the death of his father, Tsar Alexander II, who was murdered by a terrorist's bomb and died in agony.

To Serge, since the Tsar was God's representative on earth, the murder of his father was not only a personal tragedy, it was a sacrilege. Consequently, Serge became one of the most reactionary members of the Imperial Family, determined to stamp out any hint of revolutionary activity and his actions - particularly when he was appointed Governor General of Moscow - led to his being widely disliked, even hated, by the people.The greater their antipathy towards him, the more they loved and respected his wife and when, in 1891, she converted to Orthodoxy, her popularity reached even greater heights.

To her father, however, turning from Lutheranism to Orthodoxy, was seen as a betrayal of all she had been brought up to believe, and the totally unfounded rumours that Serge had compelled to make the decision, spread through all the courts in Europe. If her conversion had scandalised the family, an even greater 'scandal' was to ensue. In 1905, Serge was blown to pieces by a terrorist's bomb. Ella, hastening to the scene, literally picked up his mangled remains in her own hands and, three days later, visited his assassin in prison in order to forgive him and ask what had led to such an act of violence.From then on, after twenty years as a passive wife, Ella's life took on a whole new direction.

Dispensing with her priceless jewels,furs, palaces and wealth, she built a hospital, orphanage and convent in a slum district of Moscow, and becoming the Abbess of her Order, she personally tended the most abject patients. The idea of an 'active' religious order was entirely new in Russia, and, while the Bishops debated as to whether or not the idea was too Protestant, the aristocracy were aghast. That a member of the Imperial Family - sister of the Tsarina Alexandra - should stoop so low as to tend poor patients was demeaning and unthinkable. Ella, they said, must be suffering from some kind of nervous breakdown, brought on by the shock of Serge's murder. Undaunted, Ella continued her work - often going out unguarded at night to gather the child prostitutes and abandoned babies from the back streets. The Muscovites revered her as a saint but even that saintly reputation did not protect her from further vicious rumours, when war broke out against her native Germany.

Now, no longer 'the saint of Moscow', she was accused of being a 'Hessian witch' and 'German spy', spat at and even stoned in the street.Antipathy towards the entire Imperial Family was reaching a climax in 1916 and, to Ella, one of the chief reasons for this was the persistent (and again, totally unfounded) rumours about the nature of the relationship between her sister, the Tsarina, and the moujik, Rasputin. When Rasputin was murdered it was widely believed that Ella had played a part in his death - a fact that led to the utter breakdown of relations between Ella and her sister (whose marriage to Tsar Nicholas, Ella had almost single-handedly engineered).

By now, revolutionary fervour was sweeping the country, and several times, members of her extended family sent message to Ella, offering her a means of escape before it was too late. Having vowed to spend her life in the service of her convent, however, she refused to leave, thereby sealing her own fate. The night after the murder of the Tsar and his family, Ella was hurled into a disused mine in Siberia and left to starve to death. It truly is ironic to me that a woman who devoted her whole life to the service of others, should have constantly been at the centre of so many scandals. Perhaps it is because she was 'the most beautiful princess in Europe' that jealousy inspired so many of her detractors to create the gossip and lies.

My novel Most Beautiful Princess is based on my earlier biography of the Grand Duchess - which was shortlisted for the 2003 U.K. Biographers' Club Award. I decided to rewrite the book as a novel in order to make this remarkable life more accessible, and to allow more freedom in expressing the motivations, thoughts, emotions and spirituality of this truly remarkable and 'scandalous' granddaughter of Queen Victoria.

The novel is available via Amazon:
Grand Duchess Ella

Bearded Lady said…
Congratulations on your 100th post! And I am looking forward to the guest post. oh btw, I nominated you for the education blog award. http://2008.weblogawards.org/nominations/best-education-blog/
I know...a weird category. But I couldn't find any best biography category.
December 16, 2008 at 7:45 PM

Elizabeth Kerri Mahon said…
Thanks Bearded Lady, and for the nomination!
December 17, 2008 at 3:18 PM

Anonymous said…
I recently came across your blog and have been reading along. I thought I would leave my first comment. I don't know what to say except that I have enjoyed reading. Nice blog. I will keep visiting this blog very often.

Elizabeth Kerri Mahon said…
Thank you Sarah. And you are also now entered into this month's contest. I hoep that you continue to come back.
December 18, 2008 at 10:23 AM

TammiMagee said…
This was a really interesting read as always! I will certainly look out for the book! Have a Merry Christmas from www.histatic.blogspot.com
December 20, 2008 at 5:39 PM