Scandalous Book Review: In the Shadow of the Lion 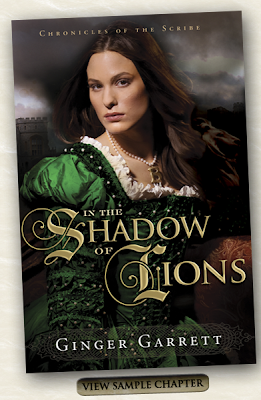 I recently received a copy of Ginger Garrett's new book In the Shadow of the Lion. I was a little trepidatious at first, I don't normally read Christian or inspirational fiction. Although I've grew up reading authors such as C.S. Lewis, Lloyd Douglas (yes, I actually read The Robe), Thomas B. Costain and Taylor Caldwell (Dear and Glorious Physician about St. Luke) and I adored The Red Tent, I've always tried to avoid overtly Christian books. I don't want to be preached to while I read. But I was intrigued when I read the back cover.

“I am the first writer, The Scribe. My books lie open before the Throne, and someday will be the only witness of your people and their time in this world. The stories are forgotten here, and the Day draws close. I will tell you one of my stories. You will record it.”


So begins the narration of an angel in this sweeping historical tale set during the reign of England’s Henry VIII. It is the story of two women, their guardian angels, and a mysterious, subversive book … a book that outrages some, inspires others, and launches the Protestant Reformation.

The devout Anne Boleyn catches the eye of a powerful king and uses her influence to champion an English translation of the Bible—Scriptures the common people could read for themselves. Meanwhile, Rose, a broken, suicidal woman of the streets, is moved to seek God when she witnesses Thomas More’s public displays of Christian charity, ignorant of his secret life spent eradicating the same book, persecuting anyone who dares read it. Historic figures come alive in this thrilling story of heroes and villains, saints and sinners, angels and mortals … and the sacred book that will inspire you anew.


A book that doesn't paint Anne Boleyn as a dark-haired temptress, swanning around the court, luring Henry away from Catherine of Aragon? One that depicts her as a woman of faith? Sign me up! This is one time that I'm glad that I put my prejudices away and picked up this book. It is incredibly well written and will appeal to anyone who is interested in this period of English history, as well as anyone who is interested in a fascinating story. I was particularly struck by the character of Rose, who has been mistreated and is distrustful not only that there is a God but of men in general. She is rescued by Sir Thomas More and brought into his household as a servant. Through her eyes, the reader gets to see a side of Sir Thomas More that is a more human portrait than the almost saint in Robert Bolt's A Man for All Seasons.

What I found most interesting about the book was the use of William Tyndale's English translation of the Bible. Here is he called by the name that he used at Oxford, William Hutchins. Garrett ably lets the reader know exactly what an English translation would mean not just to the common people of England but to women in general, if they could actually read what was written in the Bible and the role that women played, they might not be as content to stay in their place. One of the strengths of the book is that the arguments on both sides are equally weighted. On the pro side one has Anne Boleyn, and other the con side Sir Thomas More and Cardinal Wolsley. Garrett vividly portrays the tenor of the times when heretics were being burned at the stake and tortured on the tack for their beliefs.


While the characters spend time talking about the nature of faith, I never felt that I was beat over the head with it. It flowed naturally out of the story and the period of history in which it is set. If there is any flaw in the book, its that it encapsulates ten years of history into one year. I would have preferred if the book had had a larger scope and allowed the story to play out in its natural time frame, but that's a small quibble. I also felt that the third story of Bridget received short shrift in the telling.

Given the general interest in all things Tudor lately (you can't walk into a bookstore without tripping over all the fiction titles that have come out recently) and the popularity of the Showtime series, I expect that this book will find an audience, if readers are willing to take the chance on reading something that might be outside of their comfort zone.

Read more about the book and read the first chapter at Ginger Garrett's web-site and stay tuned next week for my interview with the author.
Book Review In the Shadow of the Lion

Susan Higginbotham said…
Sounds interesting, and better than I expected!
November 21, 2008 at 8:47 AM

Elizabeth Kerri Mahon said…
It's a very good book, and extremely well-written. I'm usually a stickler for historical accuracy, so the fact that almost ten years of history was scrunched down sort of bothered me, but I was so drawn into the story that I let it slide this once. I'm interested to read her earlier book on Queen Esther.
November 21, 2008 at 10:16 AM

Bearded Lady said…
I have been meaning to get this book, but was worried that it was an overtly Christian book.

It's refreshing to see a book portray the religious climate in which Anne lived. So many fictions seem to gloss over the religious issue in favor of the love story and I see these two as inseparable. Anne's downfall was partially motivated by the Catholic factions at court moving against her.

Elizabeth Kerri Mahon said…
You are so right, Bearded Lady, and that's one of the things that I liked about this book. The religious divide that was occuring in England and Scotland at this time had reprecussions that lasted for the next three hundred years. Anne was part of that. Although Henry seperated the Church from Rome it was more for dynastic reasons than religious ones, but Anne was a true believer in Protestantism.
November 21, 2008 at 3:46 PM